Before I write about our crossing into Canada, I want to share that Ben told me today we’ve been gone for 345 days!  Wow.  It has absolutely flown by.  Flown.  Impossible it’s been that long.  It truly feels like the blink of an eye and we are so grateful for the time and the adventures we still have ahead.  After all, we’ve made it to CANADA!!!

Friday morning we pulled up anchor and crossed into Canadian waters.  We anchored very close to the border so it was a pretty quick trip into Gananoque, Ontario.   After much discussion with many people we have determined Gananoque is pronounced G-an-a-knock-way.  The marina was full and we were on the waiting list but they had a Customs check in dock so we pulled up and waited for that to open up.  I jumped off and tied our lines and then got back on the boat.  Ben had to go call into Customs and all other passengers are required to remain on the boat until we are checked in.  Canadian customs are interesting.  You report in from a pay phone!  At this particular marina there was no actual office.  Just a payphone outside on the side of the marina office building.  Ben called in, gave them all our information and got our clearance number to display in the windows of our boat.  Quick and easy!  Some check in facilities use video phones instead of payphones.  And some have broken payphones and the dock master will let you use his/her cell phone.  We still haven’t gotten a clear answer on if we could have called in with our own phones.  We didn’t need to find out since Gananoque had two Customs check in facilities.

One of our first Canadian markers!

The free day dock was also completely full so we pulled back out of the harbor.  Next door was the Boat Museum and another free town wall.  The water level was so high that it was at the top of the wall.  There were a couple of small boats and jet skis tied up there but that wasn’t an option either.  The marina office mentioned that the Boat Museum lets you tie up for the day for a pretty cheap rate.  They had a floating break wall as well as a dock that was up high enough that it wasn’t under water.  We wanted to go see town for a bit and then decide what to do.  They let us know that we could stay all night.  It was just a matter of paying more.  No power or water hookup but that’s ok.  There were severe storms moving in so having a safe place to be tied up vs. being anchored was a great choice.

We walked into town to find some lunch.  It was fun to finally be on Canadian soil!  The Canadian flags were everywhere.  Town Hall was adorable.  And our restaurant recommendation, The Socialist Pig, was a great choice.  We walked around a bit and found a used bookstore.  Always a favorite for the girls and me.  This one was run by a former school teacher and she had a HUGE kids’ section all broken out by grade level.  What a godsend for me!  She pointed Molly to her shelf and I sat down with Maddy and helped her make some selections.  Then I went over to Molly’s section and looked through all of those.  We came back to the boat with another big stack for the kids to read!

After dropping off the books we went to check out the boat museum.  It was a cute little museum made up of a handful of buildings.  One building contained a nice selection of old wooden boats downstairs and a sample cottage upstairs.  The whole second floor was set up to look like one of the cabins you can rent in the Thousand Islands Parks.  All of the furniture in the cabin was brought over from one of the nearby island cabins on a barge.  All but the wood burning stove which was too heavy for the barge.  A lot of what was in the display reminded me of my grandparents’ house up in Michigan when I was growing up.  The kids stopped for a few minutes and played with Lincoln Logs and a few other toys scattered around.

Next stop was the children’s activity house where the girls each got to build a boat!  They picked out which hull they wanted and went inside with their piece of wood to get started.  They both manned hammers.  Hmmm.  Madelyn did get a little bit of help.  First step was to hammer in the mast.  Second step was to hammer in nails and use twine to make the rail.  Then it was time to decorate.  Glitter glue and stickers and markers and ribbon and felt sails.  They had so much fun.  The upstairs of this building was set up like a pirate’s ship.  Another great display.  And for the past two days they have been creating fenders for their boats from corks and dinghies using popsicle sticks.  Ben has helped them with wood glue and getting it all together.  Tonight as they were playing “marina” it was fun to listen to them.  They use their Shopkins as the people on the boats and they call in on the radio for fuel and dockage for the night and give instructions on docking and such.  I love overhearing what all they’ve learned this year. 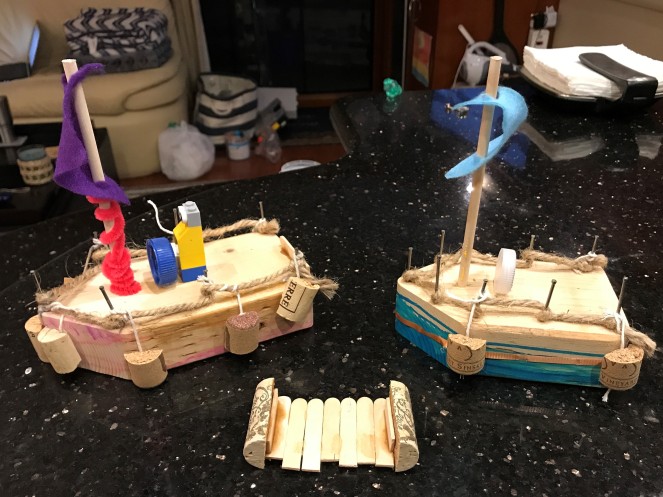 About a 2 minute walk away was a little stretch of beach along with a playground on the beach and a big splash park.  Molly and Madelyn begged to go.  We kept asking if they saw the sky.  Ben and I were watching the radar closely.  But they were hot and had been waiting all day so off we went.  They had until we saw lightning to play.  The thunder started rumbling.  The winds picked WAY up.  And they just kept dumping buckets of water on their heads in the splash park.  They were thrilled and didn’t care about the impending rain.  But once the big drops started to fall we ran at full speed back to the boat.  We got safely inside and watched the storm blow through.  The winds were fierce and we were very happy to be tied up to a dock. 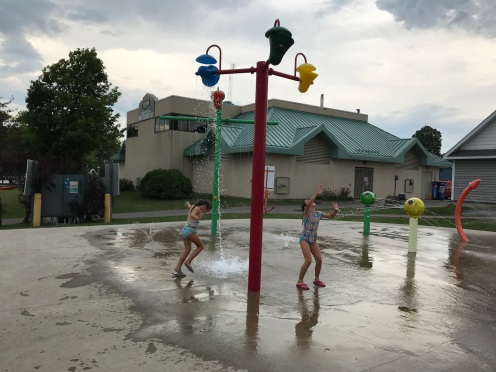 Saturday morning I got up and took a long 3.25 mile walk.  I enjoyed seeing a lot of the big old houses that are now being used as Bed and Breakfasts as well as walking around the neighborhoods.  I also walked past the dam in town that was bursting at its seams!

We had no plans for the day.  The rain had stopped but it was windy and chilly and not inviting out on the water.  We decided to spend another night at the Boat Museum dock.  We had a lazy day.  Sometime after lunch we took a walk back into town.  There was a barber shop right next to a cute ice cream shop.  Ben went to the barber shop and the girls and I got our first taste of Kawartha Dairy ice cream.  We have been hearing about this ice cream for months.  Molly and I both had salted caramel which apparently is a fan favorite for our Looper friends. 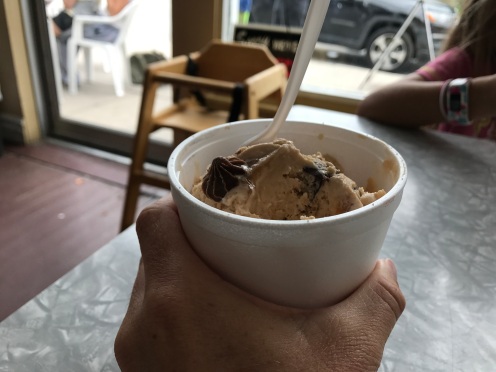 Later that afternoon the girls and I went to church and then met Ben for dinner at a local pub.  We had a quiet night and were hoping for sunshine and calm waters the next morning for our trip to Kingston.