Thursday morning we headed to Heart Island to finally see Boldt Castle!  Approaching from the water I snapped tons of pictures of the old stone structures.  I was excited to get off the boat and see what we were looking at.

Boldt Castle has a large dock space for personal watercraft next to their ferry dock.  We pulled in after asking multiple times about depth and being told it was fine because the water levels are so high.  We pulled in and of course immediately saw 3 feet under our boat which means 1 foot under our props.  No good.  We hung out for a few minutes, talked to one of the ferry drivers, and gave it another try.  Ben swung out a little wider and then came back into the dock.  The water there was so weedy and it’s possible that we were getting readings from the weeds, not the bottom.  We never touched bottom, so whatever the depth was, it was ok!

We bought our tickets and headed onto the castle grounds.  They are impressive.  We were excited to get inside and start exploring.  As I mentioned in my last blog, George Boldt was building Boldt Castle for his wife Louise.  He wanted it to be a summer dream house to look like a European castle.  He planned for 6 floors in the house and numerous exterior buildings on the grounds.  Louise died unexpectedly during construction and George halted construction on the house.  The house sat vacant and in disrepair for over 70 years.  Years later the Thousand Islands Bridge Authority bought the property and began restoring it to what George originally planned.  Many of the outbuildings and much of the main house had been vandalized and fallen victim to the harsh winters.  The TIBA has been slowly restoring the house one building or floor at a time. 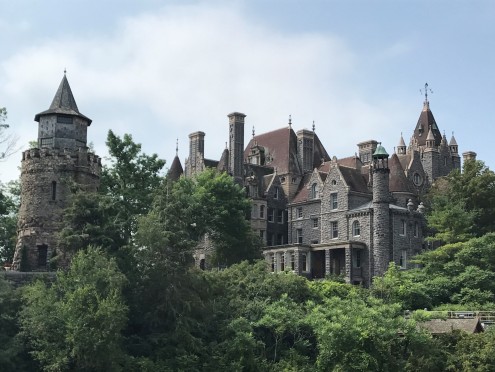 We started in the main house.  We were able to walk through the entire first floor.  The dining room was impressive.  The kitchen made my mouth water.  It was beautiful.  There were also dining rooms both for the maids and the servants as well as a servants kitchen for quick serving and clearing to the dining room and rinsing of dishes.  The servants dining room was probably my favorite room on the first floor and yet I didn’t get a picture of it.  It was large and warm and inviting with lots of windows overlooking the Italian garden and plenty of natural light.

Also on the first floor was a large ballroom for dancing complete with an organ.  The main entryway opens up to views of an incredible stained glass ceiling over the grand staircase. 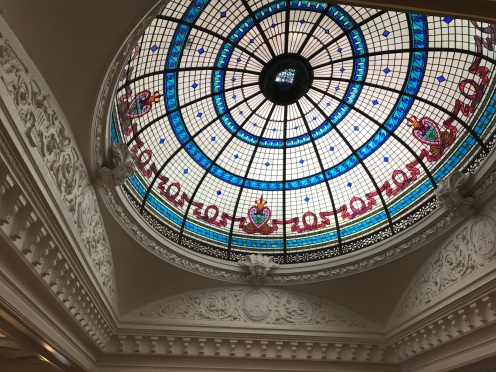 The second floor housed all of the bedrooms.  The bedroom suites were just recently completed.  George and Louise had separate bedroom suites as well as a very large suite for their daughter Clover.  The Boldts also had a son, but either he didn’t have a bedroom suite, or it wasn’t completed yet.

We kept climbing and climbing.  The third floor had exhibits of old photographs of the family as well as many of the blueprints and plans for the other floors of the building.  We were able to climb up to the fifth floor which was just the top of the building.  It would be fun to come back in a few years and see what more has been completed.  As we walked through the house we made sure to keep an eye out for the Boldt family crest – the heart with the B inside with a stag on top.  We found it in the stained glass ceiling and the floor at the bottom of the main staircase to name a couple.

We walked around the grounds as well and learned what the stone buildings we boated past were.  My favorite building on the property was the power house.  Unfortunately the water levels have been so high that it was closed to the public.  It had this adorable stone footbridge to get to the door.  It just looked like a mini castle to me.  The girls liked the underground tunnel to the swimming pool.  And the Italian garden was beautiful.

The stone building that seemed to be crumbling the most was called the Children’s Playhouse.  The playhouse is the current project for the TIBA.  We were able to walk through and there were certain areas roped off as active construction sites.  We could see the beautiful ceiling that had just been built out.  The playhouse is right out on the waterfront.  It has two bowling lanes in the basement and space for many other rooms.  The bowling lanes have been under water this summer.  It’s sad to see how much the high water has affected everything in this area.  After spending so much time in the south where there was such an extreme drought causing every bit as many problems, it’s crazy to see the other end of the spectrum with the high water level.

We really hoped to be able to go across the bay to the Yacht House.  It’s another impressive structure that has been closed this summer due to water levels.  We saw some clips of it in a film about the property and were sad not to be able to go in.  It was supposed to open this weekend so hopefully others can see it now.

We all enjoyed our time on the castle grounds.  What a special place with a tragic story.  It’s pretty incredible to me that the Thousand Islands Bridge Authority is taking on this project and doing an amazing job.

After we left Heart Island we planned to head back south and cross into Canadian waters!  As we headed south we turned to head over to Canada and got sidetracked by the beautiful coves and bays we were passing.  We got to Picton Bay, very close to Canada and Gananoque (where we were heading).  There were a lot of boats anchored and we couldn’t resist.  We pulled in and joined them.  Everyone else was just there for the day.  The girls begged to get the lily pads down and it was such a beautiful afternoon we agreed.  They played in the water for hours.  Ben joined them.  It was a bit chilly for me but I enjoyed sitting on the swim platform reading with my legs dangling in the water.  Ben and the girls took a long swim towards shore and then back to the boat.  We grilled for dinner and had a quiet night.  One other sailboat pulled in and joined us just before dark.