After a great stay in Waterford, we woke up Wednesday morning bright and early, ready to tackle the Erie Canal.  First up was the Waterford Flight.  This is Locks E2-E6 all right in a row that lift you about 170 feet.  It is set up a lot like the stair step looking waterfall section of the old Erie Canal (the original flight locks).  This section takes about 2 hours to go about a mile and a half.

After Lock E3 there is a long dock for canal boats.  These boats are out working often and we saw them up and down the canal, but when they are not in use they are docked here.  Ben and I loved how cute all the NY State canal system boats and buildings were.  Everything on the Erie canal (except the one reddish boat) was painted a beautiful dark blue and yellow.  And the NYS canal system must spend crazy amounts of money on painting.  Everything we saw with the exception of one crumbling section of wall in one lock was painted impeccably.  I kept trying to get a good picture of one of the lock houses but since I was outside handling the lines I wasn’t able to get back in quickly enough and grab a picture.  After Lock E9 I ran upstairs and caught a picture as we were pulling out of the lock. 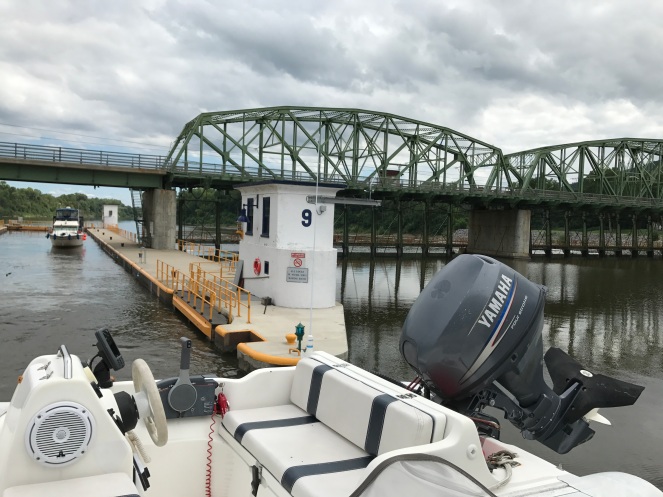 The countryside along the canal is just gorgeous.  We could have been in Ireland.  So much lush green everywhere.  Just beautiful.

Many non-boaters have asked about locks and how they work.  They are all different and it’s a little hard to explain.  Last fall in all of the locks we did I would loop a line around a floating bollard in the lock and then cleat the line back on a cleat on our boat.  The bollard would rise or lower with us depending on which way the lock was going.  The line kept us attached to the lock wall.  Many people hold two lines….one in front and one in back.  One person grabs a line and then the person driving comes outside and holds the other line.  On our boat we choose not to do this because the person holding the line has very little control.  The boat is extremely heavy and blows easily.  Instead Ben stays at the helm and controls the boat by shifting us back and forth and using the bow and stern thrusters to hold us on the wall when necessary.  Granted, I’m sure someone stronger than me may be able to hold the boat better, but our arrangement works fine and we’ve never needed a second person to hold a line.  In the Erie and Oswego canals the locks all either have a cable we can wrap a line around and then hold (they told us not to cleat them off in these, just hold onto it), or a rope hanging down to grab.  The first few locks we did I wrapped a line around because all last fall we used our own lines.  I quickly decided this was a huge pain and it was simpler to throw on some gloves and just hold onto the slimy line hanging down on the lock wall.  These pictures are of our line wrapped behind the cable and held back around the cleat on our boat.

The locks are only operational from 7 AM to 5 PM so after Lock E10 we pulled off in Amsterdam, NY for the night.  We took a cab to Target to pick up a few things and then had dinner in the restaurant just above the town wall we were tied to.  When Ben and Molly checked in for the night the guy in the restaurant told Molly kids got free sundaes that night.  So, when it came time for dessert out came this ENORMOUS brownie fudge sundae with every topping you an imagine. 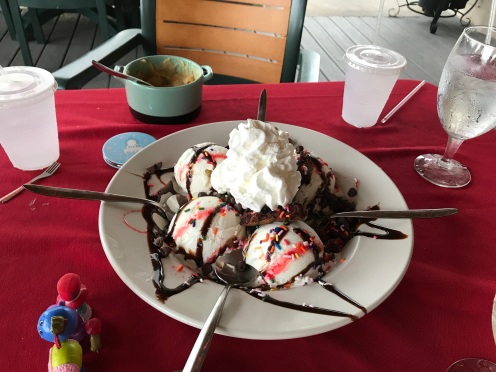 Hone for the night!

The next morning we had rain.  We saw a big storm coming on the radar so we wanted to wait until it reached us to see if it was going to break up at all.  I took the girls out on a scooter ride in the light drizzle.  Amsterdam has a beautiful waterfront path complete with a band shell, a playground and a pedestrian bridge with little plaques with history snippets.  They scootered and I walked and explored until the rain picked up enough it was annoying me. 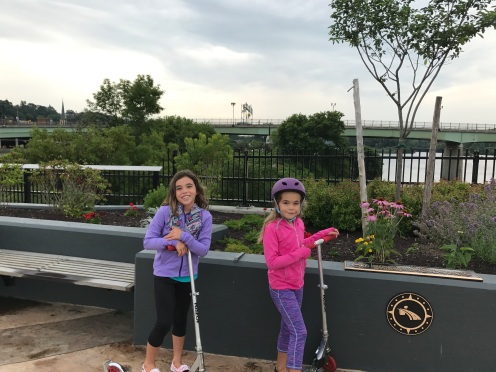 Once it let up we headed on our way.  We left around 11 AM but only did 3 locks and stopped for the day in Canajoharie.  Canajoharie was my favorite stop on the Erie Canal.  It was just the cutest little town.  It had one little stoplight in the middle of this big intersection.  We found the old canal path and what we think must have been a train depot at one point.  We had already set food out for dinner on the boat, but we walked past numerous good looking restaurants in town.  There is also a fabulous art museum that our boating buddies went to check out.  And the icing on the cake for the girls, was a real horse and buggy!  There must be an Amish community here.  They came past us going up this incredibly steep hill.  They waved as they passed us and the poor horse slowed to a very slow walk trying to pull them up this hill!  The free dock (with free power!) is along this lovely waterfront park where the girls ran and scootered and swung and played for a long time. 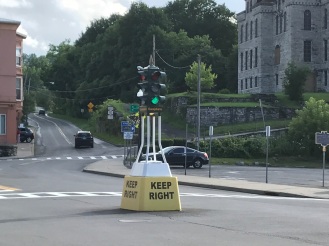 Friday morning the sun was shining and we headed for Rome!  We passed some NYS canal boats working on off loading the immense amount of trees they had pulled out of the water.  There is just a ton of debris floating by.  Ben is constantly having to dodge what look like full sized trees.

All of that came out of the canal!

We got to Rome after traveling through Lock E20.  We knew that the free town dock was a toss up for us.  A new floating dock had been installed that lots of boaters had left good reviews about.  We knew that one end was too shallow for us.  We got to the docks before our buddy boat and checked it out.  It was 90′ of dock but was one 50′ section and one 40′ section.  The 40′ section was too small and heading towards the shallow water.  The 50′ section we would have had to turn the boat around and hang our stern into the shallower water.  It just wasn’t going to work for us.  So they got tied up for the night and we moved to the other end of the free town dock that is used by the canal boats.  Seeing as it was 4:30 PM on a Friday and there were no boats there we assumed that meant no working canal boats would be coming in.  This was the craziest docking we’ve done yet.  The canal boats have larger fenders and are in worse shape than our boat so they don’t care what they tie up to – despite their pretty paint jobs.  We had to tie up to a series of wooden pilings.  There were horizontal pilings bolted to vertical pilings.  Some with broken wood chunks.  Some with large rusty bolts hanging out of them.  Ben found a spot that looked manageable and put the boat next to them.  He came down and a lady on shore watching us struggle grabbed a line for us and wrapped it around one of the big canal bollards.  It didn’t hold very well but I was able to loop a rope around one of the pilings and Ben scrambled off and got us all fixed up.  There were metal rings on the concrete sidewalk we could loop lines through and tie them off back on our boat.  The tricky part was that the vertical pilings were a foot or two from shore.  Ben is much better at all the unsafe climbing back and forth.  I’m intimidated by it and don’t like unsteady footing and wood that may crumble.  It was only about 4 feet down, so not a height issue, but it was really going to hurt a LOT if someone fell.

Once finally settled we got the girls safely off the boat and we were in ROME!  Well, Rome, NY.  And Rome, NY was no Canajoharie.  But there were some good restaurants and we had to go for Italian.  We ended up in a great old classic Italian restaurant.  I had the hugest piece of lasagna I’ve ever seen and the best garlic bread ever.  Once we’d each eaten just half of our meals and could hardly walk we headed back.  We walked through a random Friday night car show in the parking lot across the street and then walked back to the boat.  Another beautiful free town dock (again with free power!) with lovely views of the canal.  Ducks and geese everywhere.  The girls made friends with a little duck that kept following them.  Clearly they are fed often by all the people fishing on the piers. 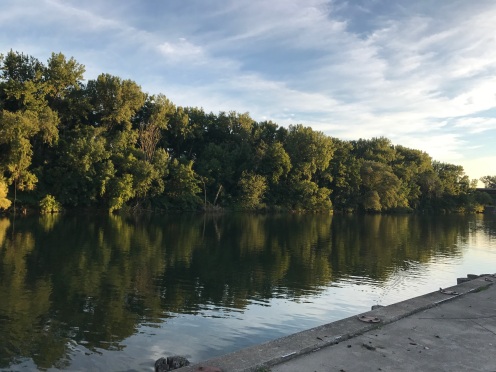 Saturday morning we pulled out to finish this portion of the Erie canal and cross Oneida Lake to Brewerton, NY.  We slowly boated past a couple of row boats out fishing.  After the horse and buggy we explained to the girls that some cultures do not use any modern technology.  This was another example.  We, on our boat with two engines, a generator, a stereo, a stabilizer, air conditioning, all the modern appliances, TVs, computers, etc. passed two little row boats.  No motor for their fishing.  One person fished, the other rowed.  Such a contrast.

We made it quickly through Locks E21 and E22 and headed to Oneida Lake.  Oneida Lake is another body of water we had been told to be wary of.  It’s very shallow for a lake.  Much of the lake is less than 20 feet deep.  It’s about 20 miles across and has a marked channel across the whole lake.  We again lucked out and had a glassy calm day and an easy crossing.  We pulled into Brewerton, NY, currently famous for its marinas with cheap fuel!  We fueled up completely full so that we can go as long as possible in Canada before we have to pay for fuel.  The girls spent a couple of hours playing with the owners’ grandson and dog and then we used the courtesy car to run a few errands and go to church.

Sunday morning we passed through Lock E23.  This was our last lock on the Erie canal!  It’s hard to make out, but we came to another fork in the water.  Left takes you along the Erie Canal to Buffalo and right takes you into the Oswego Canal.  Right it was!