Many of the locks through the canals have free walls for boaters to spend the night along.  Some even have power hookups and water.  Waterford is free, but charges $10 for power and you are allowed to stay for two nights.  We’ll take it!  Waterford’s free wall is directly in front of Lock 2.  We knew Monday was going to be a rainy day.  That was fine with us.  We’d had three travel days in a row up the Hudson and were ok with having a lazy morning off.   We worked on the girls’ blog while waiting out the rain.  Since we officially started summer break from school it’s been hard to get them to journal.  I still try to remind/make them do it a couple of times a week and this was one of those times.  I sat with Maddy and got her whole DC journal done.  She hadn’t written a blog entry since Charleston!  Oops!

Once the rain cleared we hopped off the boat.  We stopped in the Waterford Visitor’s Center and chatted with the attendant for a few minutes.  We read that the local grocery stores will let you push your grocery cart back to the lock wall and they will come pick the carts up.  We confirmed this at the Visitor’s Center and sure enough saw a lineup of carts next to the building.  We walked into Waterford for lunch.  It’s a sleepy little downtown.  We stopped at a greasy spoon diner.  It did not disappoint.  Good food and cheap.  The local dive is almost always the best place to eat.  They advertised a $2 breakfast.  The girls are happy anytime they can order breakfast food.  Ben and I opted for huge sandwiches that were excellent. 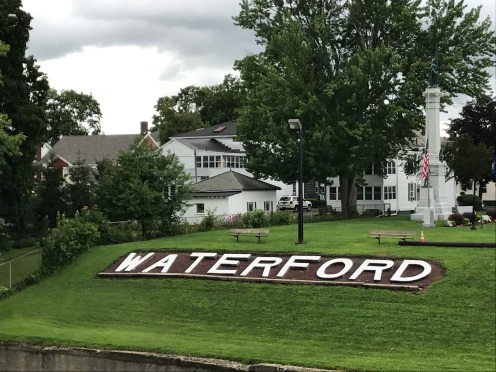 After lunch we walked across the bridge to the grocery store.  We were out of everything fresh and needed to stock up.  The fact that we didn’t have to carry groceries back was a plus so we loaded up on some other heavy things as well.  We got a kick out of pushing the cart back to the lock wall.  Ben was less than amused that I made him stop for a picture twice. 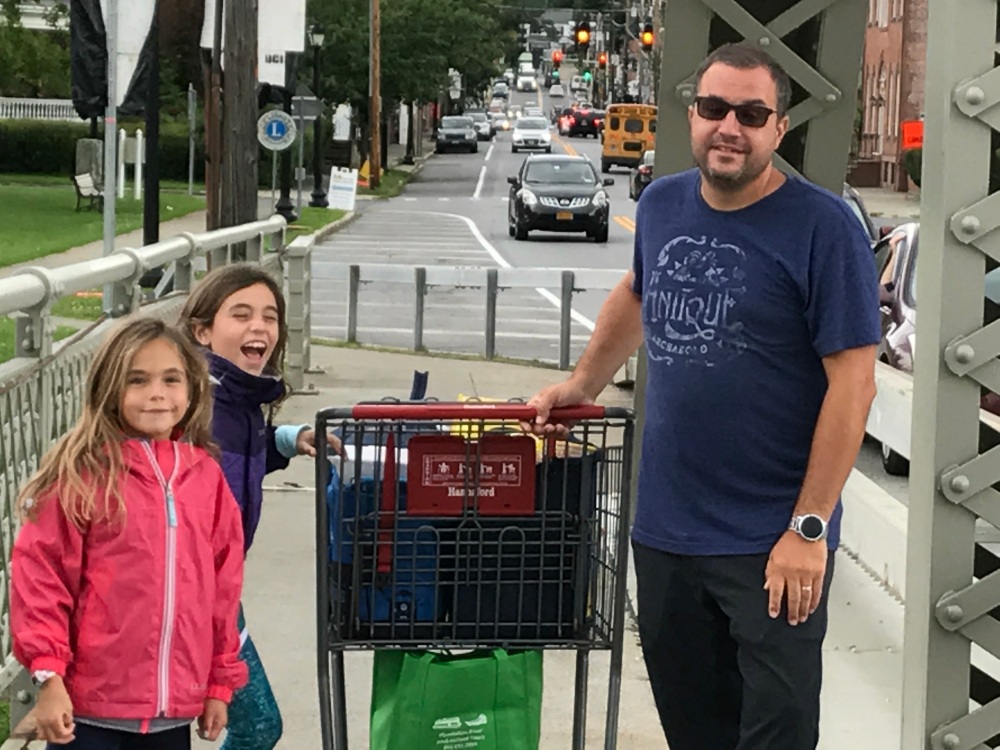 Once we got our groceries loaded on the boat we grabbed the girls’ scooters and headed back out.  We wanted to stop back inside the Visitor’s Center and pick up activity packets for the girls all about the Erie Canal as well as a Boater’s Resource packet and map.  The Boater’s Resource listed every lock in the Erie Canal and Oswego Canal systems along with a couple of other routes we were not taking.  It gave us the time in both mileage and time it should take based on the water speed limit between locks as well as the phone number for each lock along the route.  This is the 200th anniversary of the Erie Canal so traveling through the locks along the canal is free this summer.

The Erie Canal is an amazing structure.  At many points along the way you can see the original canal alongside the current canal.  The locks have been made bigger and wider to accommodate boats under power.  When the canal was first dug no boats under power went through it.  Mules and horses would walk alongside the canal on either side pulling their loads floating on rafts in the canal.  The Erie canal’s first 19 locks (Locks 2-20 since Lock 1 isn’t technically on the Erie) raise you 420 feet above sea level before the locks start descending towards the junction with the Oswego Canal.  The Erie continues on to Buffalo, however our route is to turn at the Oswego Canal.

Lock 2 was right in front us at the Visitor’s Center.  The lock tenders are very friendly and you are allowed to walk up and over the footbridges to look at the lock.  Lock 2 also has the original lock directly next to it.  It now looks like a huge waterfall but within the waterfall you can see that originally this was probably 3-4 locks.  Each stair step was a separate lock.  Locks 2-6 are called the Waterford Flight and are one right after the next.  This stair step looking waterfall was the original Waterford Flight. 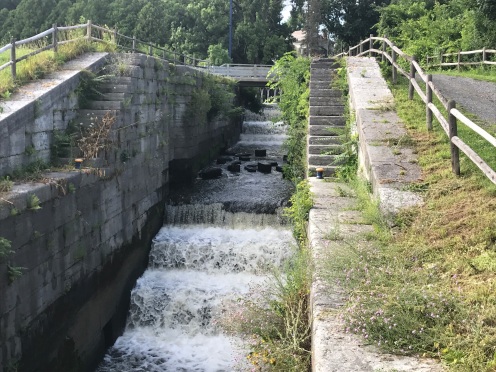 We were also able to poke into the lock tender’s house to see the controls they use to raise and lower the water and open and close the gates.  We were in a lot of locks last fall but they were all run by the Army Corps and were commercial waterways and there was no exploring or messing around.  There were a handful of Visitor’s Centers we should have visited last fall.  Lesson learned – we didn’t miss them this time.  It was fun to be able to walk wherever we wanted and look around at the locks we would be traveling through.

We finished out the afternoon with a long scooter ride along the old canal path and then into town and back to the lock wall.  We were all ready to go bright and early the next morning.  The locks are only open from 7 AM to 5 PM so we knew we had to get moving early to make decent progress.  It’s a bit frustrating when there is daylight long after 5 PM however we quickly decided it would be nice to have an end time for the day.  It would force us to make a plan and quit in the afternoon and get off the boat and explore all the towns the Erie Canal has to offer.