Well, we recovered from our insanely long Day 1 and decided to take Day 2 at a slightly slower pace.  First up was our tour of the U.S. Capitol and we smartly decided to take a cab there rather than wear everyone out walking.  When we booked the tickets for our tour Kathy found a U.S. Capitol Study Guide for kids.  On our long day on the water getting to D.C. we had the kids complete the packets about the Capitol.  This was important for both of my girls but especially for Madelyn.  Having some concrete things to look for on the tour and some background information about the Capitol made all the difference for her.  She went into the tour excited about seeing the Rotunda.

Our tour started with an introductory film, which we have learned is the norm for everywhere we’ve been recently.  I thought this one was well done and really did a good job covering the branches of government, the U.S. Capitol building, the Senate and the House galleries in the Capitol, the Rotunda, the history, and a somewhat moving coverage of all of the laws and amendments that have been passed under that roof.  For the kids the display of dates and laws flew across the screen too fast to read them all.  But I sat there in awe seeing important issue after important issue flash across the screen and it really hit home how much has been accomplished even since I was born.

After the film, our tour started. We breezed through the crypt pretty quickly and saw a few of the statues and moved into the Rotunda.  Madelyn was in awe of the dome.  She absolutely loved it and took a lot of pictures.  In the study guide the girls had learned about the murals that circle the Rotunda and the scenes they depict throughout history.  We were able to find the very first one of Christopher Columbus and follow it all the way around covering events throughout history including wars, mining for gold, the first flight by the Wright brothers and many in between.  Our tour guide also gave us some background on the statues and murals on the walls in the Rotunda. 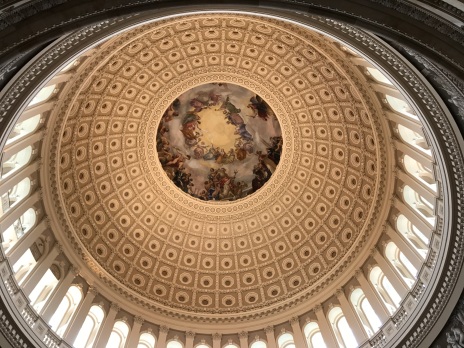 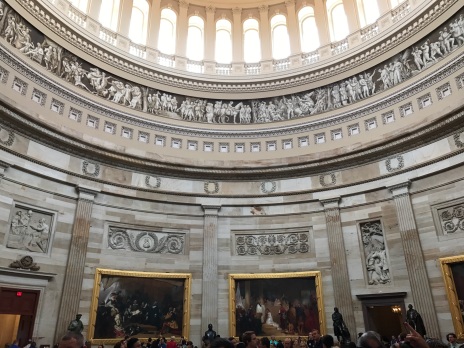 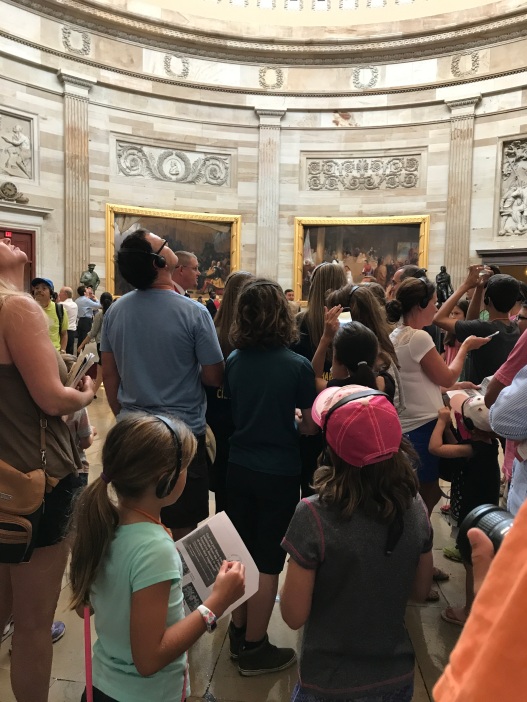 After the Rotunda we moved into the National Statuary Hall.  In the study guide we had covered a dozen or so of the statues, mostly of people the girls had heard of but some they had not.  It was a great point of reference to be able to find some that they recognized.  Our tour guide told us that each state has 2 statues in the building somewhere.  I asked about Illinois.  I had just taken a picture of the Rosa Parks statue since that is one both girls knew.  Turns out the other woman statue I snapped in the picture is Frances Willard.  She is one of the statues from Illinois and the first woman statue added to the collection.  She was a women’s suffragist and was active in the fight to pass the 18th and 19th amendments. 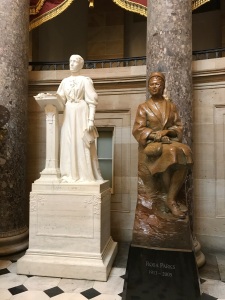 Madelyn says the Capitol, and specifically the Rotunda, is her favorite place we went in D.C.  She says she’d like to live in the Capitol so that every morning she can go look at the dome and the Rotunda.

From here we took the underground walkway to the Library of Congress.  We were directed down the hall to the Children’s room.  The little girls played with puppets and put on a show and the big girls headed to the reading room. 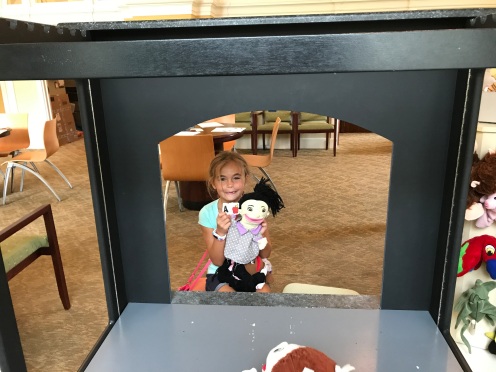 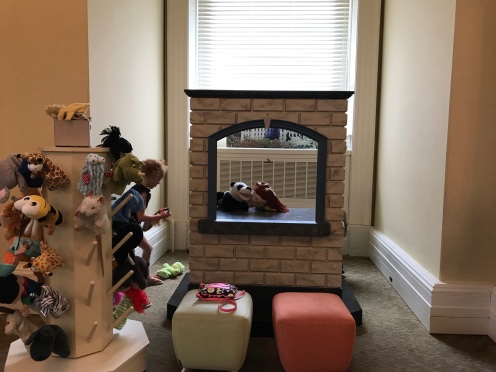 Then we insisted we move along to the main section of the library!  We could have spent hours here touring all of the rooms but we had a long list to see still so we went upstairs to look at the main floor and take pictures of another beautiful structure. 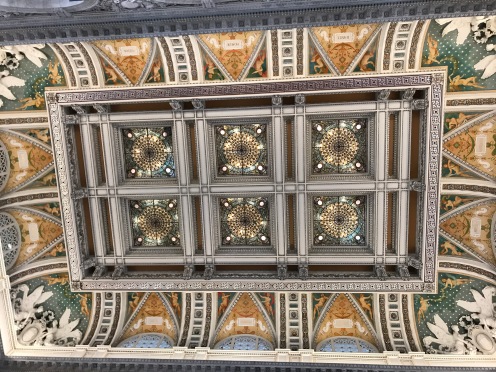 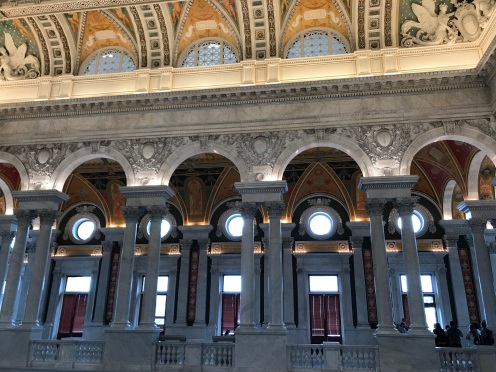 Then further up to the viewing gallery for the main reading room.  It was equally beautiful. 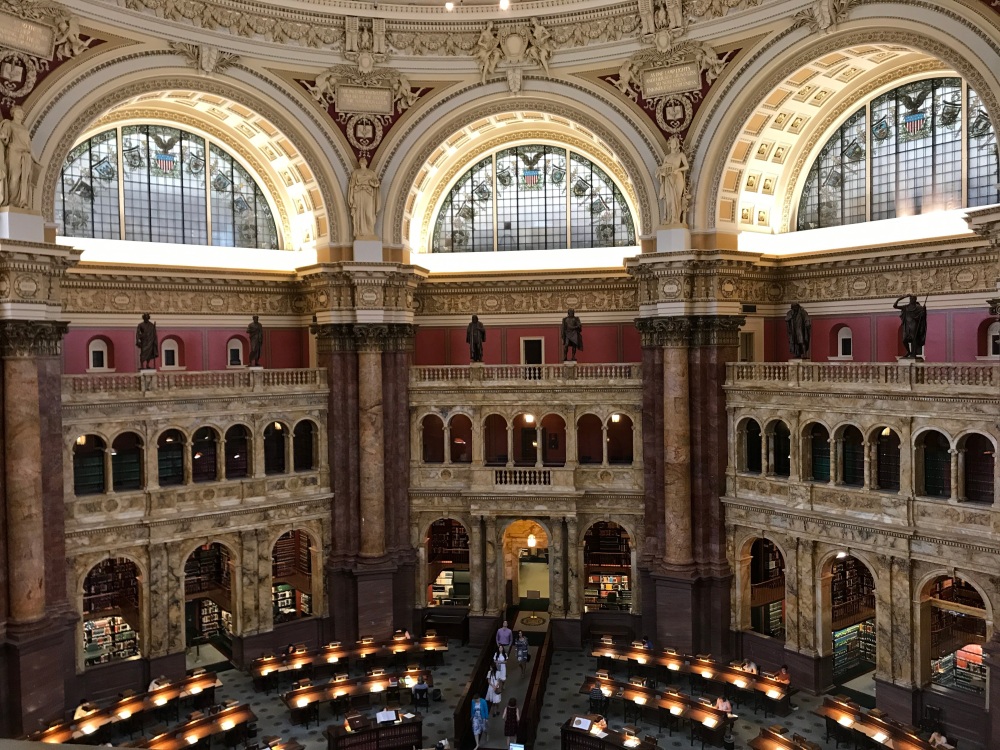 Next up, the National Gallery of Art.  We headed out into the heat, walked past the Supreme Court and headed out onto Constitution Ave. towards the National Mall.  First stop was the National Gallery of Art to see a few paintings Kathy wanted to see.  Had we had more time we would have grabbed headsets and done the children’s tour.  The girls loved doing that at the Dali museum in St. Petersburg and Madelyn asked if we could come back here and do it if we had time. 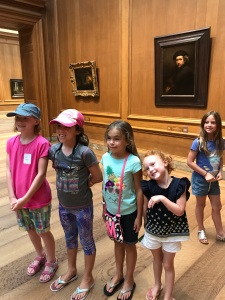 After a few minutes in the National Gallery of Art we headed out to the mall.  The kids asked to run around for a few minutes.  This was the first picture worthy shot of the Capitol building so we stopped for them to play and snap more photos. 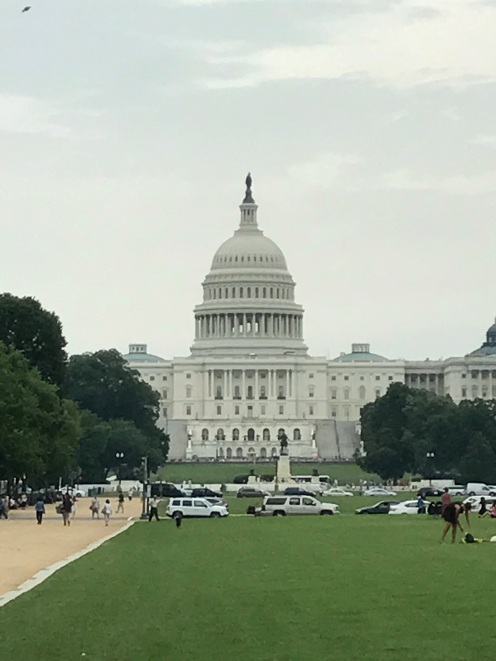 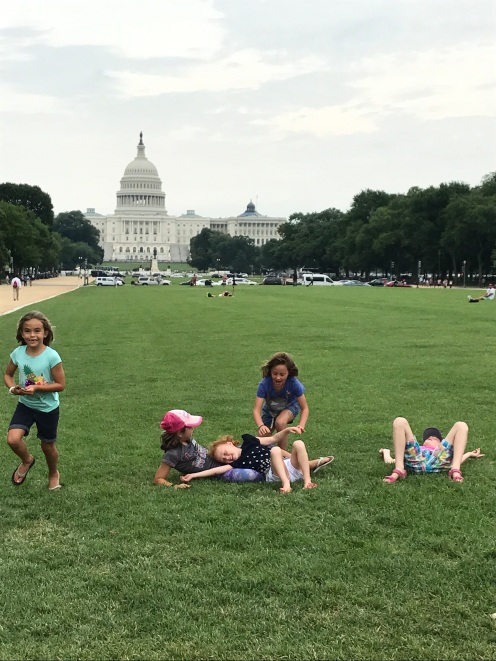 Onto the next stop, the National Air and Space Museum.  We have been told by multiple cab drivers as well as a friend that the new Air and Space museum outside the city is phenomenal.  It’s 5 times the size of this one and just amazing.  But it was a 20 minute drive outside the city and that just didn’t work this time around.  The kids enjoy air and space things.  Lots of hands on exhibits and flashy exhibits to look at. 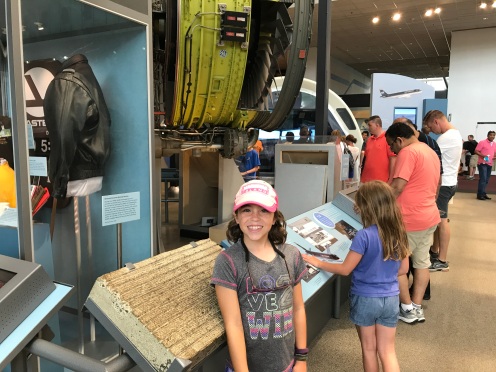 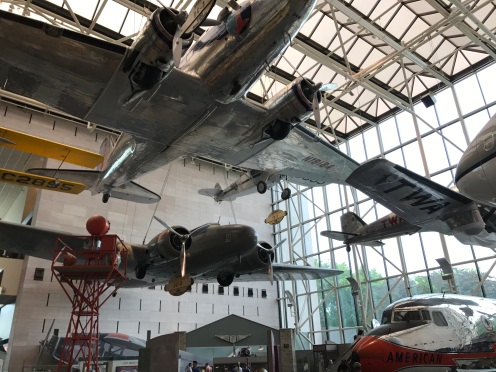 Ben commented that the museum seemed tired in a way that other places in D.C. do not.  I have to agree.  Additionally we’d been to the US Space and Rocket Center in Huntsville, AL last fall and it was fabulous.  But, this museum did have exhibits from a wide span of time. We walked through a WWI exhibit as well as a Wright brother’s exhibit and then moved into a hands on room for the girls.  The Wright brother’s exhibit was great.  The museum has the glider from 1903 on display!  The canvas has been replaced but it is the actual glider.  We studied the Wright brothers last fall when we covered inventions and inventors.  It was really neat to see the glider in person.  We also learned that they tested all of their glider ideas as kites first.  Some of the model kites were on display as well.  I spent quite awhile with Madelyn and Claudia going from exhibit panel to exhibit panel.  We learned the glider on display made three successful flights, the longest of which flew 852 feet in 59 seconds! 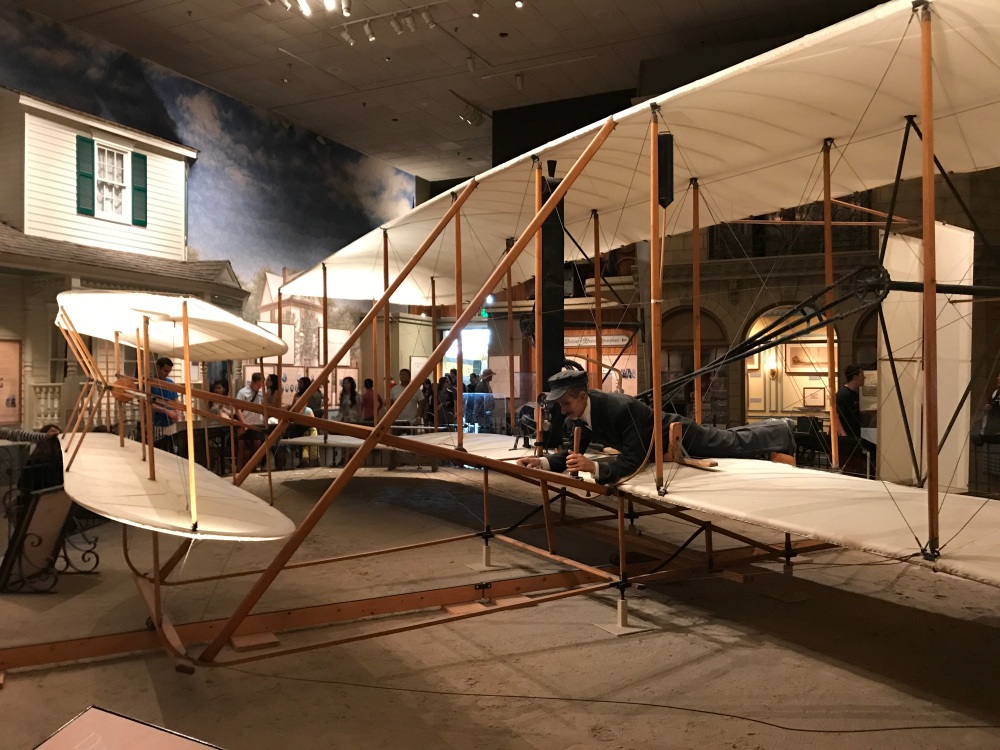 I shouldn’t sell the National Air and Space Museum short.  It had a lot we did not cover as we were tired by the end of the afternoon.  We stopped for a quick ice cream and then walked back to the marina and called it a day.  We stopped by to grab some groceries on the way back and had some excitement.  While Ben, Kathy and I were checking out Livia and Molly came running over to say that they needed Ben because Maddy’s arm was stuck.  Huh?  I looked over and there is Maddy lying on the floor with her arm pinned under a pallet of watermelons.  I took off running as well.  She had gone after a dropped toy that rolled under the crate and I thought the pallet had crushed her arm. Turns out she reached in an opening under the pallet and got stuck.  It took a group of men to move the huge crate of watermelon just an inch or two so I could yank her arm out. Thankfully just a scratch and she was fine.  We were shaken up.  That could have been so much worse!  Always an adventure.  After that we walked back to the marina all intact, made some tacos for dinner and enjoyed our last night together before the Burnetts had to head home.