We set out early Tuesday morning for our 100 mile trip up the Potomac River to Washington, D.C.  This time Jack drove and Kathy rode on the boat with us and the girls.  We had a 10 hour boat ride.  He had a 2 hour drive.  The Potomac winds and twists and turns.  Parts are very wide.  Parts get a little more narrow.  Parts are beautiful.  We passed Mt. Vernon and told the girls that was George Washington’s home.

We passed Alexandria.  We sped up for a little bit along the way and ended up breaking off the Potomac into the Washington Channel ahead of schedule.  The trip ended up taking about 8.5 hours.  We decided to anchor and get a dinghy dock pass for our time here.  It’s been great, however Tuesday when we pulled in after a very calm beautiful day on the water the winds picked up and anchoring was quite difficult.  We really wanted to get all the kids off the boat for a bit but that wasn’t happening.  The water was rough and Ben got soaked just running to pick Jack up.  Instead we offered movie night on the boat.  We had a VERY ambitious list for Wednesday and wanted everyone rested.  We enjoyed a quiet evening with a view of the Washington Monument.

Thankfully the winds died down and we had an ok night.  The next morning looked much better.  Kathy and I got up early to go get tickets for the Bureau of Engraving tour.  The ticket booth opened at 8 so at 7:30 we had Jack dinghy us to the dock and drop us off.  We walked to get tickets and walked back to the boat.  We got everyone organized and took two trips from the anchorage to get us all to shore.  I mentioned we were ambitious.  We started by walking all the way to the Washington Monument.  It’s not all that far but probably a 25-30 minute walk with the kids.  Kathy and I had talked about grabbing a cab there to make sure we didn’t start the day exhausted.  She and I had already walked 4 miles.  But then somehow we were all energized and just started walking and there we were.  It was HOT.  As we knew D.C. in June would be.  Livia made a break for it when she saw the first water fountain of the day!  This started our trek from water fountain to water fountain.

The Washington Monument is beautiful.  I took so many pictures of it.  We can see it everywhere we go.  From the boat.  From anywhere we’ve visited.  It’s always there and I keep snapping new pictures of it from what seem like better angles. 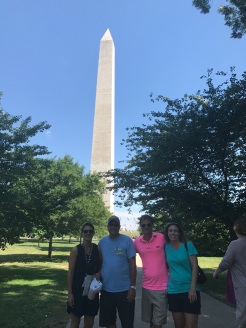 From our tour of many angles of the Washington Monument we walked over to the WWII Memorial.  We haven’t really studied WWII much with the girls but explained that at the Memorial each star represent 100 soldiers that lost their lives.  It’s a moving display.  And from the fountains you can see the Washington Monument! 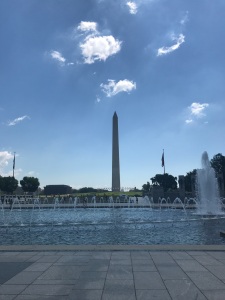 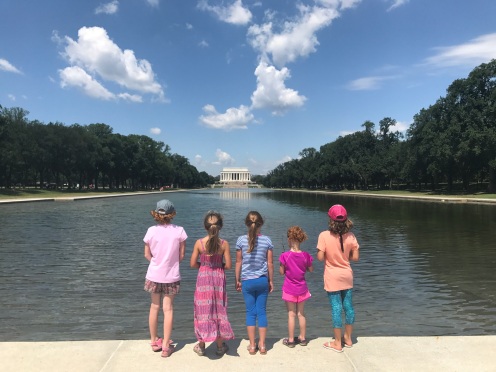 We walked down to the Lincoln Memorial and climbed the grand steps to the top.  I’ve mentioned it was hot right?  Really hot.  And humid.  And hot.  Really hot.  But awe inspiring to see such a grandiose statue and such an important figure in our history.

We have studied a lot about the Civil War on this trip.  It has been present in so many towns and cities we have visited and Lincoln has become the President that Maddy always brings up when asked about presidents. 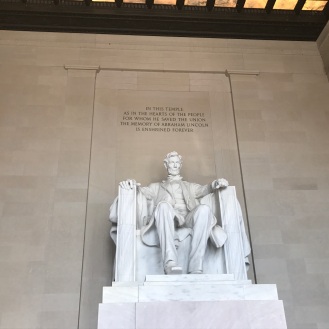 We continued on to the other side of the reflecting pool and walked through the Vietnam Memorial.  I was last at this wall 20ish years ago and still remember being moved by it.  It’s all so overwhelming for the kids.  And it’s just a big wall.  But then we explained that every single name on the wall was someone who lost his/her life in the Vietnam War.  To make it more concrete Ben did a little digging.  My brother in law Brian’s older brother Marshall lost his father in Vietnam.  He was MIA.  Ben found out where his name was located and a ranger helped us find the row and eventually his name, William M. Price.  She then gave the girls pencil and paper to do a rubbing of his name.  We have them saved and will pass them along to Marshall and his daughter Price (both named after Marshall’s dad).  Livia and Claudia did rubbings of one of only 7 women’s names on the wall.  The loss of lives in these many wars represented here is so sad and hard to take in.  I’m glad we were able to show the girls and at least expose them so they may be able to comprehend the gravity of these wars later. 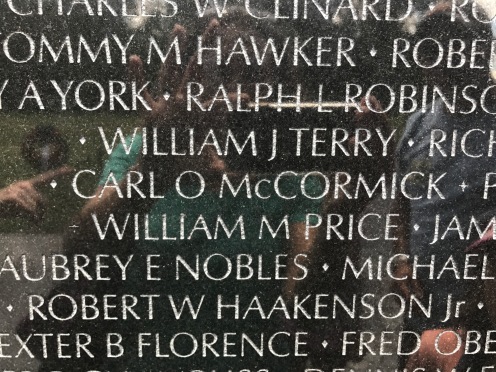 We stopped for lunch and an air conditioning break and then headed out to walk another half hour back past the Washington Monument to the Bureau of Engraving for our tour.  Otherwise known as the money factory.  This was a favorite with all of the kids.  The adults enjoyed it too.  We learned the process followed to make our money.  Our paper money is made from cotton and linen.  We got to watch as the paper was first dyed the correct colors, then printed and security features added.  We watched as men on the floor fanned the large pages of bills to separate them and then fed them through a machine to take a picture of every sheet.  We were surprised that there is a 5% defect rate.  For a lot of machines that seemed kind of high to Ben and me.  That money is shredded and then repurposed.  Some of it is recycled and some is used to make the items in the gift shop.  Finally we watched as the money was cut and stamped with the seal and serial number.  We learned that every 1 in 200 or so (we can’t remember exactly how many) bills is a “star bill”.  It has an * instead of a letter in the serial number.  We quickly opened our wallets and checked all our bills.  All letters.  But I will now be on the lookout for a star bill!  We also learned that it costs $0.11-0.14 to make each bill.  That seemed a bit high to us, but not shocked since it is an all government run process.  It could be highly efficient and right now it is not.

No pictures were allowed during the tour.  It was really interesting to watch.  After the tour we headed to the visitor center and gift shop where we could snap some photos, look at all of the generations of old bills and pick up some dollar bill magnets for the girls’ collection.

Since we were not yet exhausted enough we decided that since we were so close to the White House we’d walk on over.  We were trying to get to as much in that geographical area as we could so Burnetts could see as much as possible in the time they had in D.C.  Have I mentioned it was hot?  We began our water fountain trek again.  Some tired kids got shoulder rides from already tired dads.  We passed the monument AGAIN and trekked on to the White House.

We arrived to find Pennsylvania Ave. barricaded more than normal.  They were not letting pedestrians through and we spotted snipers on the roof of the White House. Security told us to go out onto the ellipse park area and look from there.  Security said it could reopen at any time and we could come back.  We watched for a bit and nothing happened so we decided that was close enough and we’d come back by another day.

By this time it was around 4 pm.  We promised Molly we would go to Georgetown Cupcake while we were in D.C.  She loves the show D.C. Cupcakes and this is the cupcake store where the show is set.  We knew we had to walk a ways from the White House to catch a cab so we started walking again.  Then we looked at a map and it was only about a mile and a half.  So we kept walking.  And walking.  And then it was annoying to get two cabs for 9 people so we just walked the whole way to Georgetown.  With 5 kids.  And 4 very tired adults.  Kathy said she thinks we may have been delirious.  I have never felt so dehydrated.  What were we thinking?

We thankfully arrived to a very short line.  We expected a line down the block but only had a few people in front of us before we got in the store.  Molly lit up when we got inside.  She was so beyond excited.  She is a truly genuine and sweet child.  She thanked us over and over for bringing her.

Once inside decisions had to be made.  They were out of red velvet!  A crime!  So Livia had to make a different choice.  Ben and Molly had peanut butter fudge.  I had peanut butter banana fudge.  Madelyn and Claudia had a birthday cake with unicorn topping.  Livia a rainbow and Sabina vanilla.  They were indeed quite good and a welcome treat after the long day. 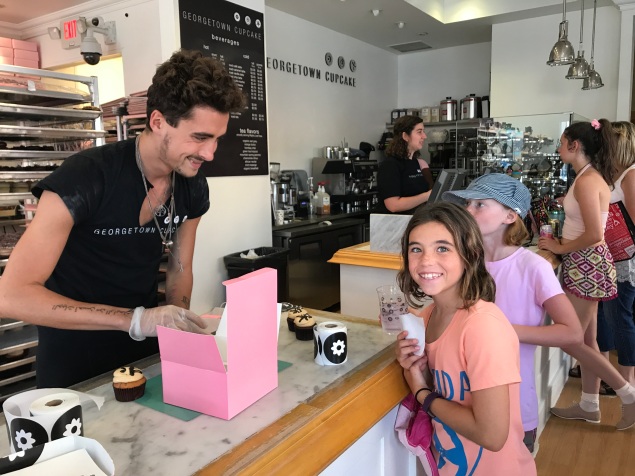 We actually did NOT walk back to the marina.  We could hardly stand up.  The girls and Ben and Jack walked 8.5 miles.  Kathy and I had an extra 4 from first thing in the morning putting us at 12.5 miles for the day.  We fell into cabs back to the marina.  Took the dinghy back to the boat.  Drank gallons of water and collapsed.  We made the girls a quick dinner and got everyone in bed.  We were exhausted but we covered so much and had a wonderful first day in Washington, D.C.!