After leaving Hopetown we pulled into Marsh Harbor and anchored for a night so we could run into town and stock up at the good grocery store again.  We took the dinghy into the marina to say hi to friends that were still there.  We got our groceries, went to bed and pulled out the next morning to head down to Little Harbor.  Little Harbor is as far south as most people travel in the Abacos.  It’s on Great Abaco island like Marsh Harbor and Treasure Cay.  It’s a pretty narrow and shallow entrance so we anchored outside. Our friends from Trawler Life got a good picture of us pulling up right outside the harbor trailing our dinghy.

That turned out to be shallow as well so we anchored across the water at Lynyard Cay with a number of other boats.  It was a bit of a sporty trip as we had to cross the North Channel which had big swells coming in.  We confirmed again these are NOT comfortable in our boat and Madelyn had a minor freak out.  Nothing out of the ordinary and we talked to friends on Trawler Life (a trawler) and Igloo (a sailboat), both of whom also said they were uncomfortable and rolling all over the place. So, it’s not just our boat.

We took the dinghy into Little Harbor to meet Michael and Cathy at Pete’s Pub for lunch.  Little Harbor is a tiny little community.  There are about 50 houses on the island.  No electricity – all solar!  All the water they have is rain water.  The girls were kind of in awe of all that….they can’t make it a day without YouTube and their iTouches you know.  The thought of only solar power and rain water blew their minds.  Pete’s Pub is this awesome little outdoor pub and bar in the sand.  T-shirts that people have signed and left hanging from the ceiling.  Stickers and names on all the pillars.  Amazing fish.  Amazing burgers.  Pretty darn good drinks.  Right on the beach so the kids could play.  And it randomly had a pole in the middle of the sand for who knows what – but the girls loved it and we got multiple comments from the wait staff and other patrons.  Yes we know our kids are playing on the pole.  Thankfully their young minds don’t know more than how fun it is to swing around a pole.  Despite how it looks to the rest of us!  We’ll show them again when they are older. 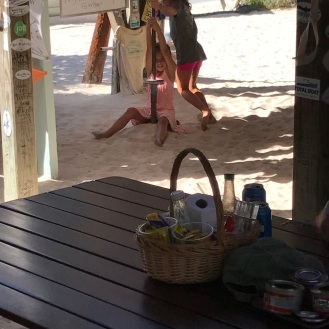 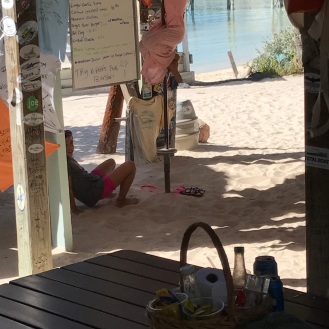 After lunch we took the dinghy back to the boat and then to the beach right by where we were anchored.  The kids played for a bit before we headed back to the boat to watch another beautiful sunset. 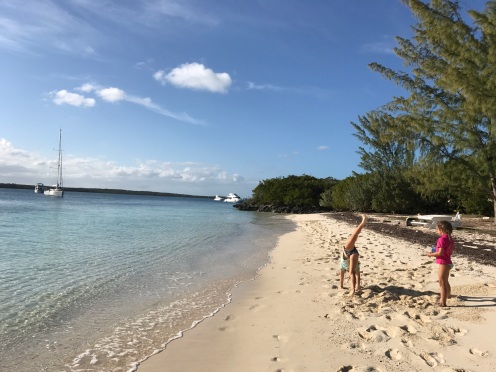 Our boat is at the edge of the picture

Friday we headed back into Little Harbor for lunch again.  Our friends on Igloo were still there and we were hoping to see them a bit before they left Saturday for Spanish Wells.  The world is really so small.  As we pulled into the harbor on our dinghy we spotted a sailboat from Manistique, MI.  Many of you know that we go there every summer as Kathy’s parents live there.  I quickly snapped a picture and texted it off to Kathy.  Turns out her parents are with them visiting right now in Italy and of course know the boat and owners.  Small world!  Anyway, Kerry from Igloo took the girls for a ride on her paddle board around the harbor and then we went into Pete’s for lunch.  After the BEST tuna I’ve ever had we took a walk out to the remains of the old lighthouse.  It was pretty cool to stand inside the old lighthouse and look out through the crumbling windows. 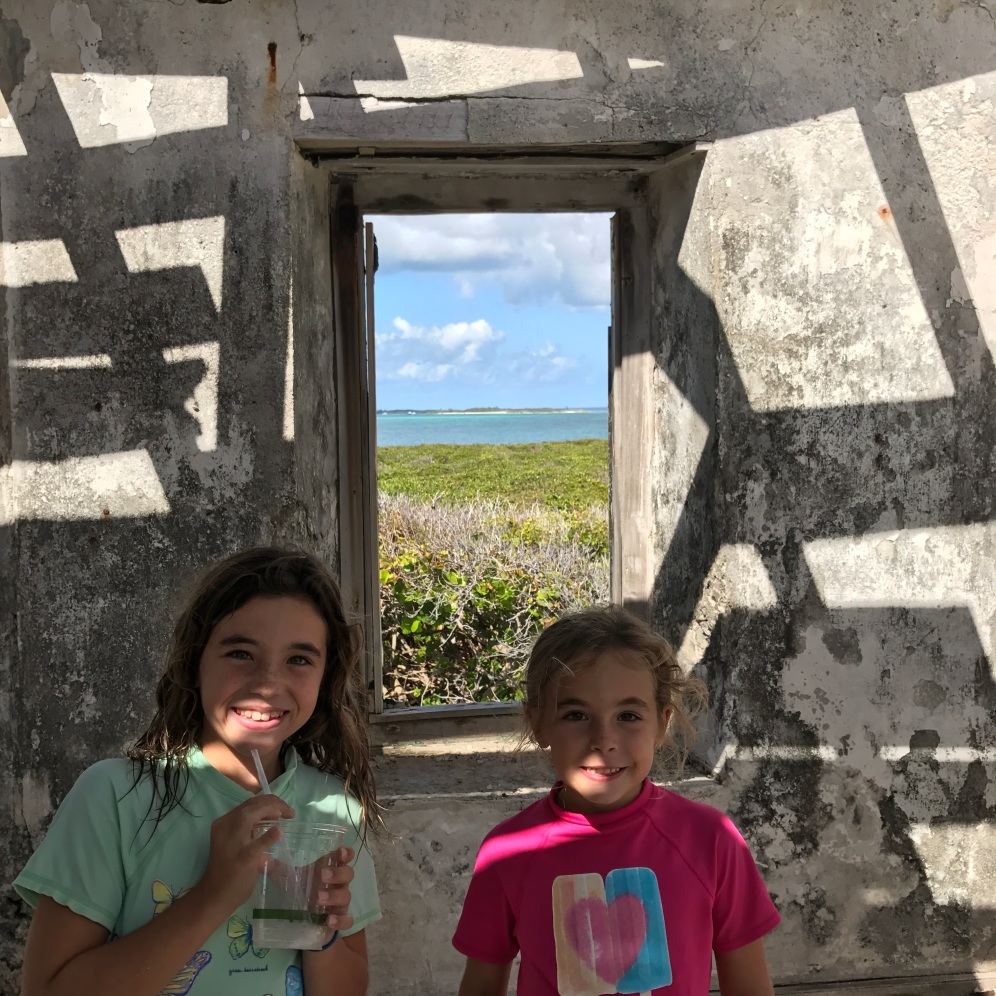 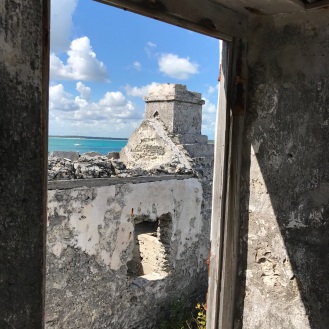 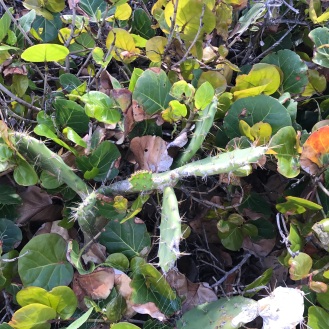 Cactus in the Bahamas!

We walked back to Pete’s and Dan and Helayna from Igloo had come over from the mooring field.  Helayna is 15 and so sweet.  She took the girls down to the beach and played catch with them.  Which turned into an entire afternoon and evening of playing with them. She’s a saint!  The girls came running up asking if they could go see the sailboat.  Helayna is old enough to drive their dinghy!!!!  Yes of course, put on your life vest and GO!  The girls were in heaven getting to do something so cool.   They rode on the dinghy with no parents out to the sailboat.  There’s not much they love more than seeing other people’s boats.  She took them all over their boat.  It’s also the first sailboat they’d ever been on.  She showed them how the swing keel works and where they store water and all sorts of things.  Anyway, they returned to the harbor with pretzels and art supplies!  Did I mention she’s a SAINT!?!?  She brought a huge collection of pastels and paper for the girls and a local adorable little boy joined in as well.  So the parents stood around talking and having a few cocktails all day while she entertained our kids.  They created some beautiful pictures and Kerry insisted that we take home a box of pastels.  The girls are very excited to get them out again and to hang their pictures around the boat. 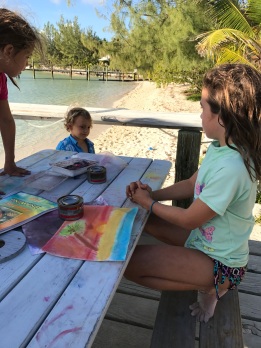 After pastels Helayna took them out on the stand up paddle board.  What a day for them.  Both of them loved the paddle board and as the sun was setting Helayna was out in the water with them.  Then it was dark and after 7 PM and we were still at Pete’s Pub!  What a perfect island day.  We had to say our goodbyes to Igloo. They pulled out Saturday morning and headed for Spanish Wells.

We got up Saturday to a beautiful morning.  We’ve talked a lot about how much we are loving this lifestyle and loving all the travel and new places.  Many of you have patiently listened to us go back and forth about our plans and our future.  It changes constantly.  Saturday was a turning point for us.  We had already made the call that we were not heading south to the Exumas.  On south from there would lead to another year at least of travel.  And we made the decision that our current boat just isn’t the boat to do that much ocean travel in.  To get to the Exumas we would have left Little Harbor and traveled down to Spanish Wells which is on the north end of the Eleuthera.  From there we would jump down to the Exumas.  We decided it was too much this time.  But then we woke up Saturday and it was gorgeous and I really thought for a minute about wanting to make the run down to Spanish Wells at least.  Our friends were on their way, we could just hang there for a few days and then come back up to Little Harbor.  It was a tempting thought but we decided to just stick with our plan and not go.  Turns out it was probably good since a beautiful morning turned into a quick storm that blew threw.  We happened to be in Little Harbor exploring a cave when it hit.  It was a wet and rough dinghy ride back to the boat!

After the storm passed we headed north to Sandy Cay to snorkel.  Sandy Cay is a protected reef.  We got up there and Trawler Life was there already snorkeling…or trying to. The current and wind were so strong they recommended not putting the girls in the water.  Molly was pretty upset but there was no chance we would be able to snorkel with the water moving like it was.  So we headed a little further north and anchored at Tilloo Cay.  Tilloo is a 4 nm long cay that stretches almost to the south end of Elbow Cay.  From where we anchored we were able to see Tahiti Beach, which the girls loved.  We took the dinghy up there to play for an hour or so before sunset.  Cathy from Trawler Life snapped a picture of our boat in the sunset.

Sunday we got up and spent a few hours playing at Tahiti Beach.  We were there when the tide went full out and it was gorgeous.  The girls spent a good half hour or more exploring hermit crab shells all over the rocks with the tide out.  They found some more conch and Ben spotted a good sized starfish. 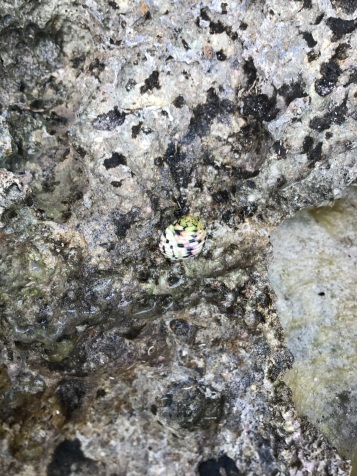 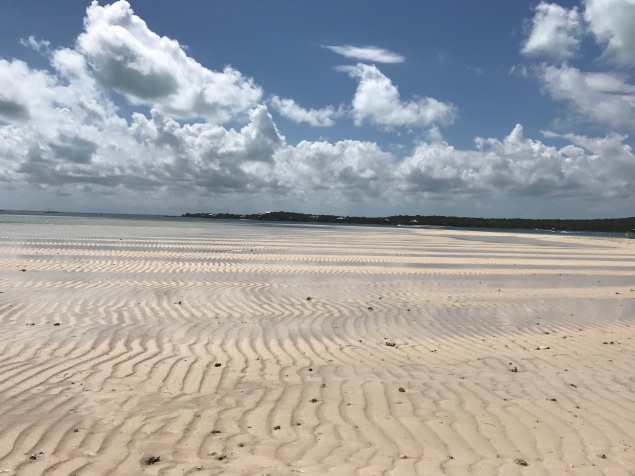 We went back towards the boat and Michael and Cathy were waiting for us right on the coast of Tilloo where they had been snorkeling and cruising around.  They had us follow them in close to shore where they had found some HUGE starfish.  The girls (and Ben and I!) were amazed.  Cathy and Michael just picked the starfish right up.  Molly held one.  Madelyn was a little cautious but she did touch it.  And yes we were careful and returned them gently to the water!  Turtles were everywhere zipping all over the place.  Molly was bent on snorkeling so she swam all over.   We even got to see a nurse shark swim past. 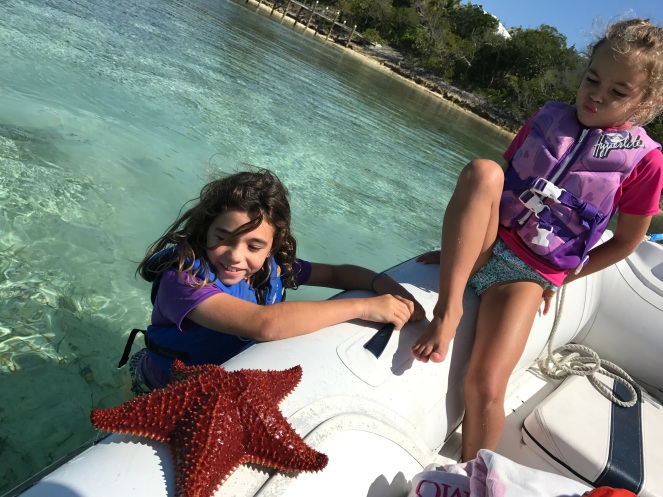 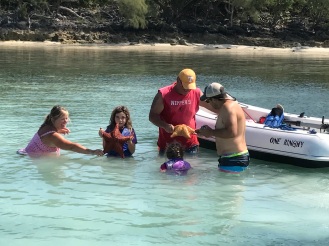 Sunday late afternoon we were going to head north a bit and anchor in Marsh Harbor again.  We could see some rain in the distance and decided to wait it out since it was perfect where we were.  Well, we eventually decided to head that way.  Bad timing.  It got crazy gusty and Ben quickly turned around and back into our anchorage.  He got the anchor down right as huge wind gusts and some violent rain hit.  It didn’t last long but was something else.  When Ben pulled up the anchor to move us further in to a better spot the anchor picked up some sort of a cable.  Ben was able to unhook the cable thankfully and we moved into a better spot for the night.  The calm after a storm is incredible.  Water was glassy, there was a double rainbow.  Just a beautiful evening.

It’s been a wonderful few days exploring new places and anchoring out – something we haven’t done much of.  We’re thankful as always for this experience of a lifetime.  We are watching the news right now about all of the snow at home and on the east coast and have the safety of everyone there in our thoughts.  We continue to discuss daily what our future will look like.  If we want to continue being able to live this adventure we will have to make some changes at home and with our boat.  I suppose if anything the conversation keeps us busy and is fun to think about.  Our travel wish list continues to grow.  It’s a big wonderful world out there!