After passing under the Might Mac we made our way to Beaver Island. We’ve been up and down the lake before and haven’t stopped there so I wanted to this time.  We pulled into the mostly empty marina and it was another warm sunny day.  Ben got the girls’ bikes down and off they went again.  We walked and they rode down to the beach.  After a few hours on the boat they needed some playtime.  The water was so calm and not that cold.  I waded in to about my knees just to cool off from the heat of the sun. 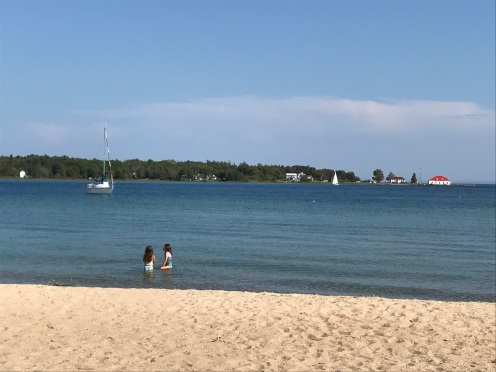 After we left the beach we walked close to two miles the other direction on the island to the old lighthouse.  The lighthouse was built in 1858 and is 46 feet tall.  It was decommissioned in 1962.  The Fresnel lens was put in one of the outbuildings and is still on display.

The girls enjoyed fairly empty streets and having the freedom to ride their bikes as much as they wanted.  Tuesday morning we walked to the highly recommended Dalwhinnie bakery for breakfast.  It met expectations.  The girls got donuts and split an order of French Toast.  Ben had an egg sandwich and I had a really good veggie scramble.  After breakfast Ben went to get the boat ready for the trip to Charlevoix.  The wind was already picking up.  The girls wanted to ride their bikes more (always!) and took off down towards the park again.  Pretty quickly we got underway and made the 30 mile trip over to Charlevoix.  We got in safely and had another close to 80 degree sunny afternoon to enjoy.

After chatting with the very lovely people at the marina we walked to the beach.  We were pretty sure this might be our last beach day for a long time.  The sun was warm.  We had a great view of another Michigan lighthouse.  There was a playground at the beach and another one across from the beach.  The girls favorite game at playgrounds on the beach is to get wet and then hit the slides.  The playground on the beach had the old school super tall, metal slides.  They turned it into a complete slip and slide and thankfully no one walked away injured!  As the afternoon wore on the expected wind shift happened and the temperature totally changed by the water.

On our way home we walked past the famous Mushroom houses of Charlevoix.  Ben later learned that these houses are used as vacation rentals!  That might be fun sometime. The girls thought they were really cute.

Then we walked past the library and found yet another playground!  It was a vision of seasons colliding.  The leaves were changing and falling.  Molly and Madelyn were both in swimming suits and were making leaf piles to jump in.  They played until I got tired of sitting and we headed back to the boat.  There is a community splash pad right at the marina with heated water.  The sun was still warm now that we were away from the wind off the lake and the girls played in the water and then rode bikes until it was time for dinner. 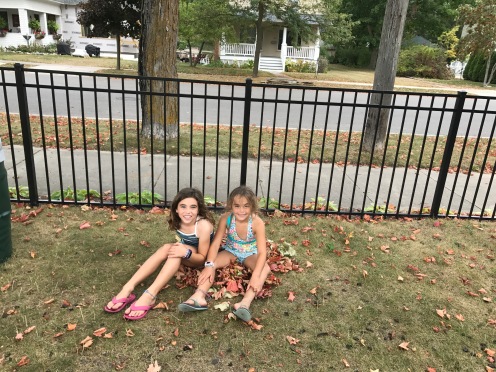 Wednesday brought the expected cold temperatures.  Brrrr.  After swim suits and flip flops the day before we really had to bundle up.  It was 50s and 60s all day but with a biting wind and felt freezing compared to the previous 5 days!  The folks at the marina had told us to be sure not to miss the library.  The girls and I loaded up backpacks and they hopped on bikes and we headed that way for school.  It was SUCH a nice change of pace to have a little room to spread out for school and books galore to choose from.  Madelyn did much better here (Molly usually does fine for school wherever she is).  However Madelyn also wanted to play with everything.

This library was incredible.  Unlike most we’ve been to.  It used to be a school building.  The building was in disrepair and needed to be expanded to accommodate a middle school.  Money could not be raised for this and instead a new building was built for the school.  Eventually the community took over this building and raised some obscene amount of money to turn it into the beautiful place it is today!  We went three days in a row and I still didn’t make it to all of the rooms.  I talked to one of the librarians for quite awhile and she was telling me what all they are doing with the schools.  Many kids come to the library after school for organized programs or study time.  And as so many schools seem to be cutting library programs (it’s not just in Chicago!), they are trying to help out.  She was telling me they are trying to get all of the high school students’ school fines cleared out so they can check out books from the library here.  She was saying that some kids are 17 and need to do research for school but have fines left over from when they were in elementary school.  They want all of the kids to be able to use the library as much as they need.

The lobby is lovely.  Then we turned a corner and passed a teen lounge, a tween room, a computer lab and then a huge children’s area.  The children’s area was probably the size of our entire neighborhood library in Chicago.  It had room after room after room.  Little kid rooms.  Middle kid rooms.  Big kid rooms.  Molly was in heaven.  There were 30 books of a series that she likes and countless others that she found.  I think she read 3 chapter books last week.  There were computers everywhere.  Kid computers, research computers, listening stations.  There was an arts and crafts table set out to make bookmarks.  A checkerboard.  A Lego scavenger hunt which was a great brain break activity for the girls!  Kid computers with lots and lots of educational games – all stations with headphones provided!  A story phone that the kids could lift the receiver and have a story read to them.  Trees with reading nooks in them in every corner of most of the rooms.  Large trees with backpacks hanging on the branches stocked with puppet and story sets.  The list goes on.  There was even a large beautiful wooden boat complete with a steering wheel and controls for the kids to drive. 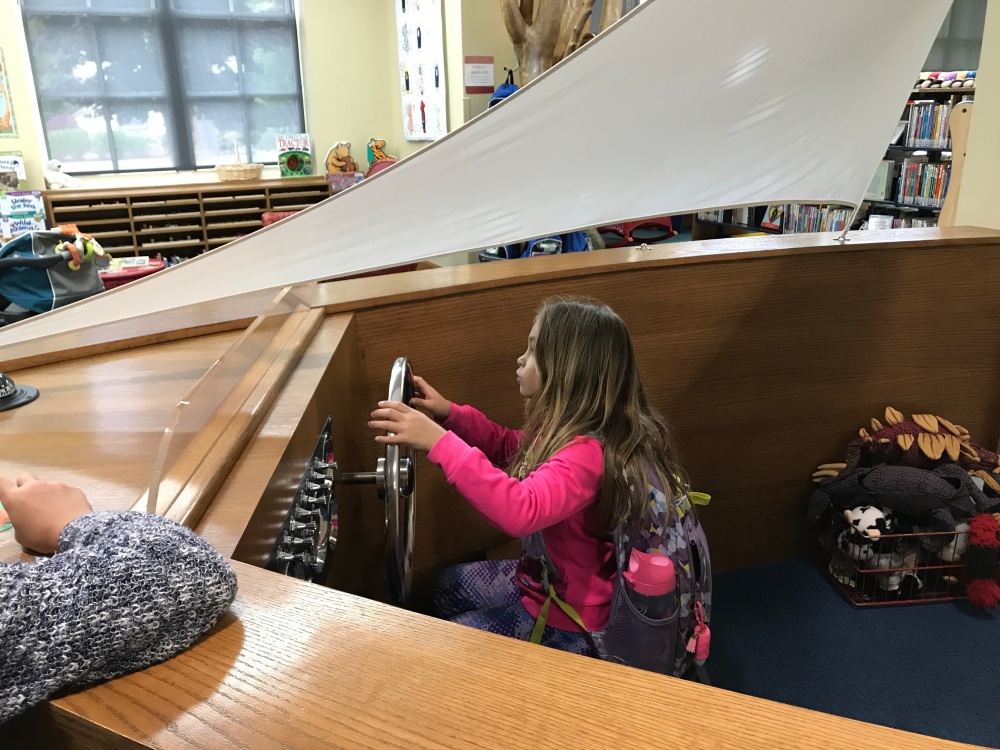 And then Maddy found the playroom – a large playroom filled with Legos and kitchen sets and all sorts of other toys.  Outside of that room was a children’s garden.  This place was just spectacular.  As we walked around I made my way to the other end and found a quiet reading room with comfy couches and a fireplace and a PUZZLE table!  I love puzzles, but unfortunately never had time to work on the one in progress.  I did peek back in the next day and see the progress others had made.  Finally on Friday afternoon I walked through the main library.  It used to be the school gymnasium and the transformation is incredible!  Needless to say we were impressed and moved in for the week!

Wednesday after Molly and Madelyn finished their work we walked to the crepe place we went to two years ago.  It was still there and still fabulous.  Yum.  Then back to the library for “recess”.  Maddy was so excited to have real “recess” on the playground.  Then we went back in to do a little reading and grab their bikes and ride back to the boat.  It was a full day at the library!  After we got back to the boat Ben and I had a grocery shopping “date”.  Molly agreed to stay on the boat with Maddy.  The store was at the end of the block, but Molly doesn’t love being alone so it was a good little outing.

Thursday there was a slight chance we could move south but the small craft advisory was extended, the wind was still kicked up and the waves were not pretty.  Back to the library for school.  We settled into our spots but Thursday was toddler story day so school wasn’t nearly as successful.  The library was loud and it was hard to concentrate.  We did better after lunchtime when all the littles went home for naps!  Thursday night was a real treat!  The girls stayed on the boat and we went out for dinner.  Like a real date night!  We haven’t had one in months and we had a great dinner.  Nice restaurant overlooking the water, really good food, good drinks.  We made it all the way to waiting for our check before Maddy texted asking when we’d be back.  We were back in time to put them to bed but Molly loves being babysitter and she had Maddy in jammies, had read to her and sung her songs.  So sweet!

Friday was miserable.  We woke up to cold rain, thunder and lightning.  We knew it should clear around lunchtime so we got most of their work done and when it cleared outside we needed some fresh air!  We loaded up the little bit of school work left to complete and headed out for more crepes.  Couldn’t resist.  And then off to the library again.  They were probably sick of seeing us and yet everyone was so friendly.  Molly grabbed a book and settled in to read.  Maddy had some work to finish and then hit one of the computers for some games.  Sadly we said our goodbyes to the Charlevoix library and headed back to the boat with a stop along the way for some salt water taffy!

Saturday morning was the day!  Finally, for the first time since Tuesday we had decent traveling conditions.  We had a big day traveling 120 miles south to Ludington.  We set out at 7:45 AM and caught the 8 AM bridge opening to head out to the lake.  The water was beautiful once we turned the corner and we had a great trip.  We really enjoyed Charlevoix and look forward to going back next summer.