We had about a week to spend exploring the south eastern part of the Georgian Bay.  We knew we would have to end up back in Midland to leave the boat for a few days to head to Chicago for our niece Sophie’s Bat Mitzvah so we wanted to stay close.  We had a great route planned of going to Beausoleil Island for a few days and then to Frying Pan Bay, and then around and back south to Hope, Beckwith and Christian Islands.  We’d heard about the turquoise water and white sand beaches of these islands and couldn’t wait to see them.  Mother Nature had other plans.  The winds and rain scheduled for Labor Day weekend all but ruled out getting over to the beachy islands.  So, we set out Friday afternoon with Tom and Ellie on Raffamuggin and headed to anchor in Beausoleil Bay.  Beausoleil Island is part of the Georgian Bay Islands National Park and has a number of docks run by Parks Canada.  It also has many places to anchor.  After talking to some other boaters it sounds like we would have had to head there Tuesday to secure one of the docks.  We were just fine anchoring.

First we went all the way north in the bay and checked out Chimney Bay.  It was a bit crowded and not a lot of swing room with boats already there so we headed back a little ways south and anchored in the part of the bay called Ojibway Bay.  All of it is beautiful and scenic.  Ellie and Tom anchored close by.  They just bought their boat in Rhode Island and don’t have their dinghy with them (it’s with their other boat at home in Anacortes, WA) so they haven’t anchored at all.  We had our dinghy though and they said they’d give it a try.  We took our dinghy over to their boat and offered to take their dog Maddie to shore.  The girls adore her and Maddie wasn’t interested in the potty pads on the boat so Ben and the girls took her to shore for a quick walk.  We hung out on their boat for a bit and Ellie cooked up some hot dogs for the girls.

The wind was pretty strong at anchor but we had an uneventful night.  The forecast for the entire weekend was wind and rain on and off.  So we just had to pick our weather windows carefully.  Saturday morning we zipped over again and took Maddie to shore for a potty break and another walk. 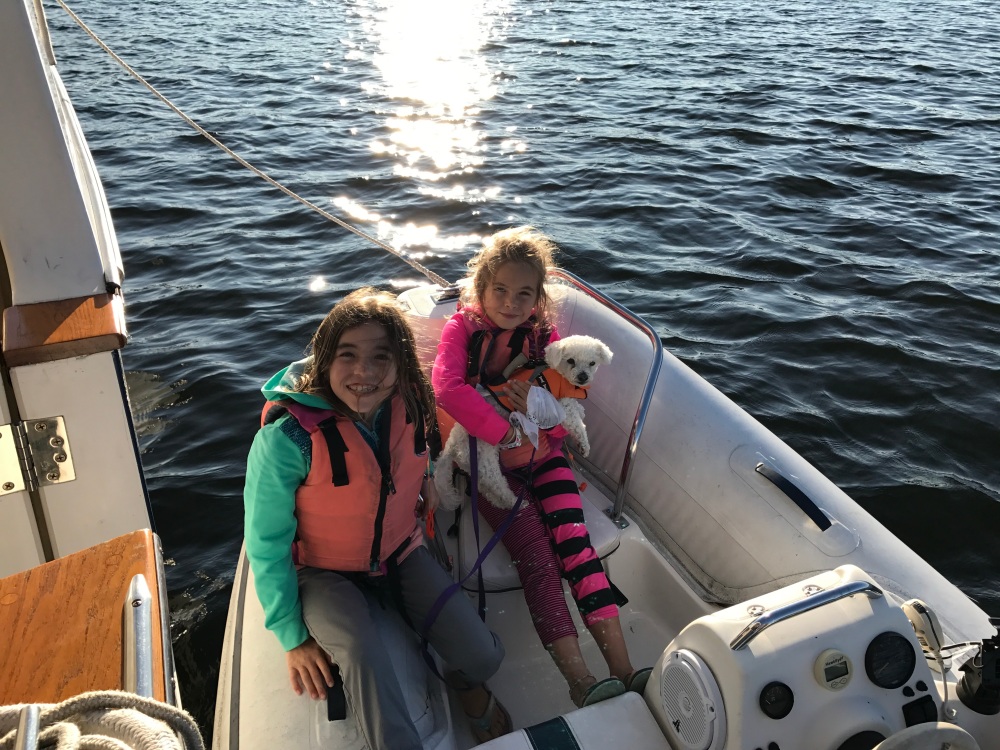 The girls are going to miss her a lot!  Then Tom and Ellie headed to Honey Harbor on their boat.  We followed a bit later through Big Dog Channel in the dinghy.  We definitely won’t try this on the big boat!  But it was a fun and quick dinghy ride.  Honey Harbor is a tiny little town with a big free town dock.  We tied the dinghy up and walked around and found lunch at an outdoor Irish place with live music and right on the water.  By this time the morning chill had worn off and it was warm and sunny.  Madelyn really wanted to go to the beach so we headed back to the boat.  We dropped Ellie and Tom and Maddie the dog at their boat.  They had walked into town from the marina so we took them back via water.  We stopped for a few minutes to chat and say goodbye as they planned to move on the next day.  We got back to the boat and Ben realized he didn’t have his wallet.  He was also concerned that the boat may have drifted some.  So, while he was a little frantic about finding his wallet he moved the boat to a different location.  After just setting the anchor he didn’t want to leave the boat so the girls and I took the dinghy back to Ellie and Tom’s boat to see if the wallet was there.  They had looked but we asked if we could come crawl around and look too.  I never drive the dinghy.  In fact this was only the second time I had driven it without Ben in it I think.  Molly got the biggest kick out of it.  We didn’t get lost and made it safely to our destination.  Tom and Ellie had taken their boat apart looking.  Nothing.  We crawled all over looking as well.  We were about to give up and head back into town to the little grocery store by the town dock when Ben texted.  His wallet was found!  Where???  In the parking lot of the liquor store!  He must have missed his pocket when he walked out of the store.  Someone turned it in and the lady working there somehow found him on Facebook and sent him a Facebook Messenger message.  For all the bad that can be said about social media at times, it saved us this time.  It would have been such an incredible hassle to lose all of that in a foreign country no less.  Of course nothing serious like the terrifying hurricane bearing down on so many right now, but nonetheless we were thrilled to have it back.  The liquor store was closing in 10 minutes.  The girls and I zipped the dinghy over there and I docked it again!  We ran to the store and found the door locked.  Ben called again and the lady working brought it out to us.  We headed back to the boat.  By this time unfortunately it was 6:30 PM and too late for the beach.  We felt badly.

Sunday we woke up to early rain and cooler temperatures.  Beach hopes were dashed again.  Once the weather cleared up we took the dinghy back out to explore.  We went back south on the island to the visitor center.  We walked through the camp grounds.  The setup is great.  They have a house to keep all food in away from the bears.  They have clever ovens with chimneys for cooking and a number of different camping sites.  There are areas to pitch tents, areas of small cabins and areas of bigger cabins.  We found a park ranger who told us about a water snake eating a frog!  Off we went to find that.  I took some pictures but it’s very hard to see.  The snake was in the grass and the frog’s back legs were in it’s mouth.  The frog’s head and front legs were sticking out of the snake’s mouth.  It was quite a sight to see and certainly something none of us had watched before.  The girls were fascinated! 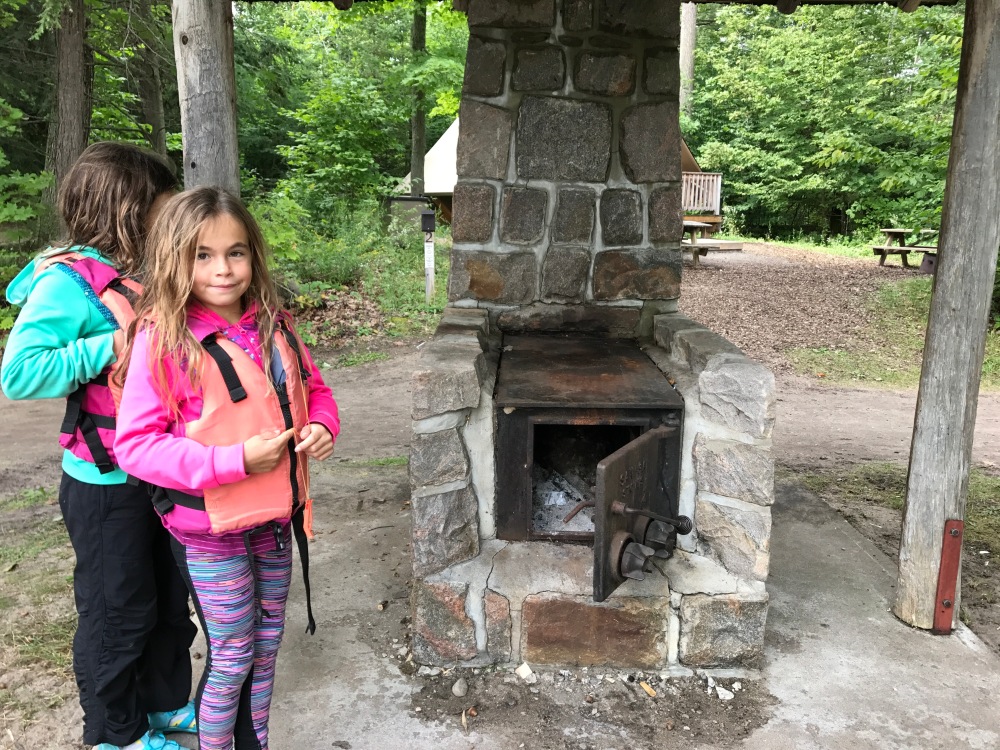 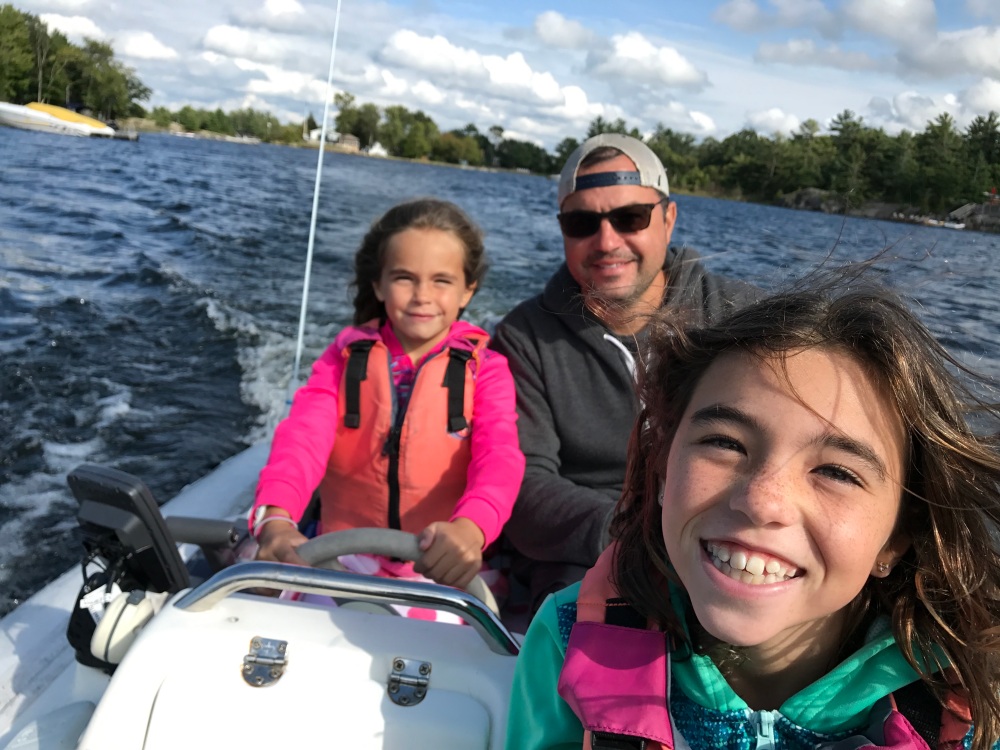 Ben built a fire and we made our first s’mores of the summer!  Yum.  All of Beausoleil Island is so pretty.  We took the dinghy quite a few places.  Some are rocky and have big boulders for the girls to climb on.  Others are more grassy and sandy.  There are hiking paths all around. We hiked back a little bit in a few places but didn’t go too far.   We had been warned by our guide book an many other boaters about rattlesnakes and bears! 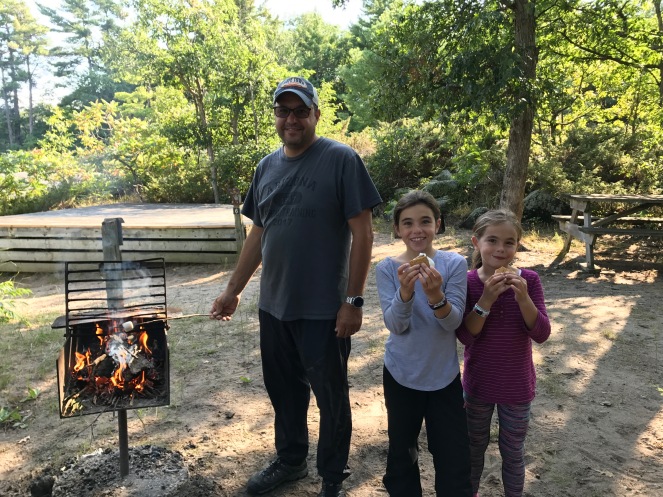 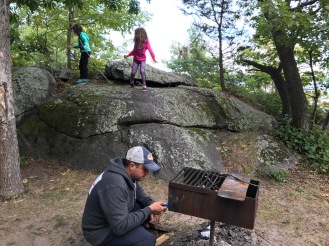 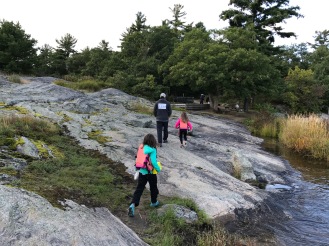 Monday was Labor Day and with the crummy weather a ton of boats had already left Sunday.  Monday was like a ghost town as we watched all the boats flee.  We went to shore in a different spot and made another fire at 10:30 AM and had more s’mores!  Why not?  We finished off our supplies and the kids played awhile. There was only one big boat left on the dock so we decided to pull up and join them.  The wind had been fairly gusty out where we were anchored and the docks were tucked in enough that they were blocked from the wind.  So we moved up and got settled and visited a bit.  These folks told us that there had been multiple bear sightings that morning.  There was a momma bear and two cubs roaming around.  All of the trash cans are bear proof and the campgrounds composting toilets are built way high up a large staircase to keep the bears away. 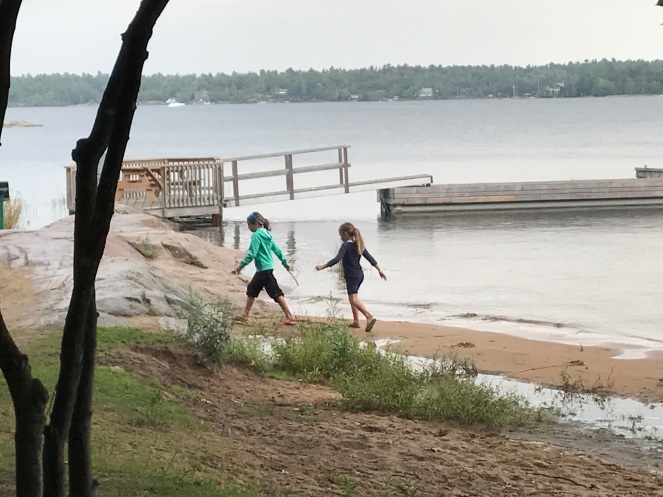 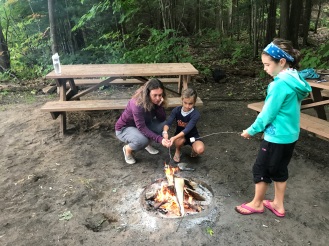 We cooked dinner and enjoyed a beautiful Labor Day sunset on the boat.  The girls were getting geared up for their first day of school!  We are homeschooling again this year since we aren’t home.  The girls both requested to be homeschooled and as long as we’re still traveling we’re going that route for now. 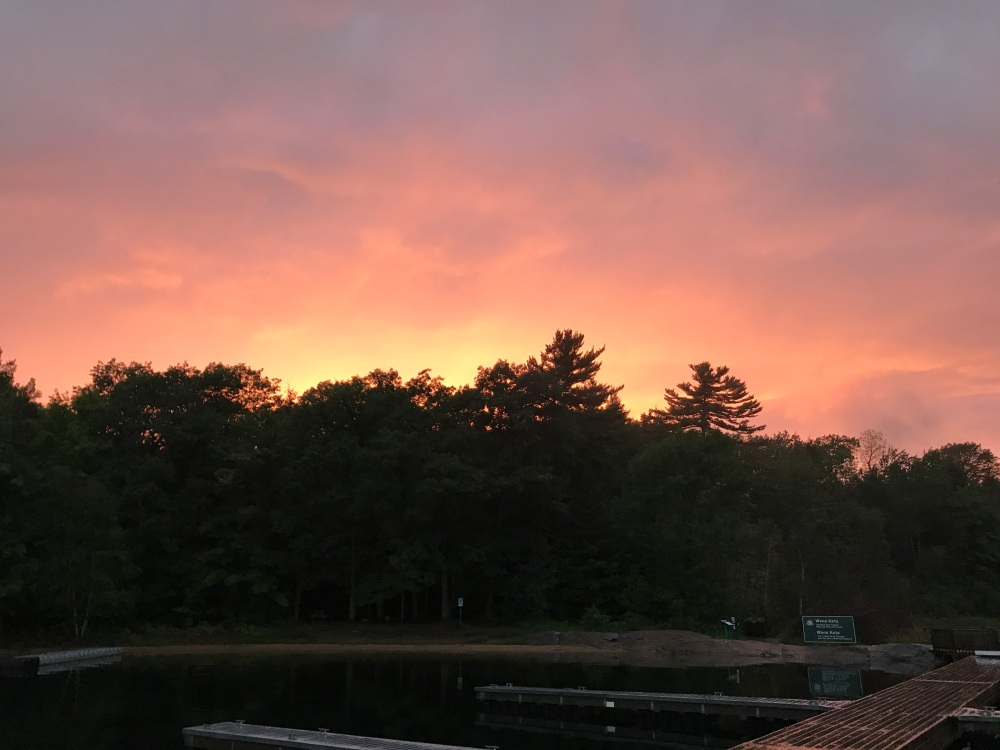 Tuesday was the first day of 2nd and 5th grades for the girls!  It was a beautiful morning with water like glass.  The sun was shining and it was a good start to the new school year.  We had a fairly productive first day.  Madelyn fell back into her normal complaints and difficulties but we powered through.  I asked each of them to write about what they’d like to learn this year and what they’d like to improve upon.  One awesome aspect of homeschooling is that we can pick what we want to study to a certain extent.  We have some good subjects to cover.  Molly requested we learn more about weather (hurricanes specifically!), more about Cuba and how to type.  Madelyn asked to study electricity again as well as maps and geography.  So we have some great units ahead for the year. 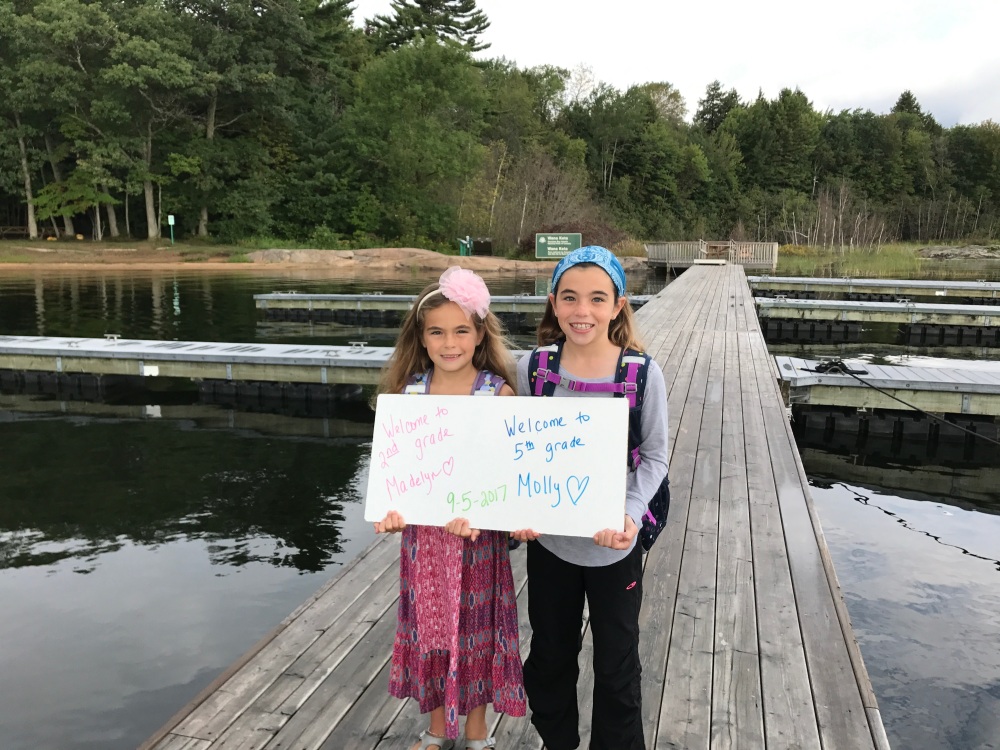 Once school was done we took the dinghy out for one last exploration of Beausoleil Bay.  We first went to Picnic Island and found the store closed after the weekend.  Back to Honey Harbor and then we continued north along the channel to Frying Pan Bay.  All our boating friends who have come to Canada have told us to go to Frying Pan Bay.  Monday or Tuesday we could have taken the big boat there but since we knew we were heading back south to Midland we didn’t bother moving north.  It was a fun dinghy trip.  Beautiful as always.  The bay is tucked in and quiet and still had quite a few boats in there post-weekend.  We got off the dinghy and walked around a bit.  What a gorgeous little treasure.

Wednesday we said goodbye to Beausoleil Island and headed back to Midland.   Thursday we will begin our drive back to Chicago.  It’s a long drive so we are going to stop and see the Burnetts along the way in Michigan.  Friday we will arrive at our house for the first time since August 29, 2016.  The kids are so excited to see their rooms and their things for a couple of days!

I am reminded again of how blessed we are to be on this trip.  We are safe and protected up here to the north.  We have met so many people on this journey that are now lying potentially in the path of hurricane Irma.  We are watching closely and keeping in touch with everyone we can to see where they are and how they are doing.  Between hurricane Irma bearing down, the devastation already caused by hurricane Harvey and the terrible wildfires out west we are reminded daily of the force of Mother Nature.  We are so thankful that we’ve been blessed with such good weather.  As we keep our friends and family members in our thoughts these next few days, weeks, or possibly months we’ll try not to complain about some wind and rain and chilly temperatures slowing us down.