Ben had been dreading this day for quite awhile.  In fact three days prior he was ready to turn around and go back the other way and down to the Welland Canal.  I usually go along with whatever he feels strongly about since he drives the boat but I was very against turning around.  Countless boats have made it through this route and we’ve been in touch with a couple with a draft similar or larger to ours who also have unprotected props.  We spent two days waiting out wind and Thursday was the day to go.  We had the dinghy down and being towed, we were light on water and half full of fuel and Ben moved what he could to the front bedroom and away from the back of the boats and the props.  We found a buddy boat to travel with and passed a few others going that direction as well.  We set out to complete the 45 miles to Orillia.

We quickly crossed the small lake past Rosedale and waited to enter the Trent Canal.  Ben and the other boat we were traveling with called ahead to announce our entrance and just as we were about to enter the Kawartha Voyager cruise ship pulled out of the canal.  This was a huge relief as we did not want to meet this ship in any of the canals.  One other boat called and said they were entering from the other side of the Trent Canal but thought we could both fit.  Ben said we would wait.  The other boat had a 12 ft. beam and we have 16 ft.  Many places in “the ditch” are only about 30 ft. wide and we didn’t want to chance it.  The ditch is mostly muddy bottom and strong thick weeds but if you get out of the center of the canal at all you are going to hit bottom.  Waterway Guide even says you will bump a few times along the way.  Not confidence instilling to read that.

Finally the other boat appeared coming out of the channel and we pulled in.  A couple of boats had zipped ahead of us and agreed to call back any shallow spots (it was all shallow) and warn us of any other boats in the channel.  We approached at idle speed and made our way through the narrow canal.   Ben spent the day on one engine mostly.  He would put one in gear and then the other.  It reduced the risk of wrecking both props if we hit and kept us going as slowly as we could.  You could see shelves of rock just under the water outside of the boat.  It was crazy.

This section of the Trent Canal let out just before the Kirkland Lift Lock.  Ben had put our antennas all the way up before we left so we had the best radio reception we could.  I commented we had lots of bridges to go under.  He said he had to be able to hear.  But then we approached a bridge and it flitted through my head that we needed to lower them.  I probably looked at the depth finder or something and the thought of the antennas just as quickly left my head and Ben forgot.  We managed to take out parts of two of our antennas on that bridge.  It was quite a noise.  And a chunk of one almost hit a small boat boat behind us.  Better antennas than props!

This was our second lift lock.  At this point in the Trent-Severn Waterway we started going down.  So far all the locks on the Trent-Severn have been going up.  From now until the Georgian Bay we will be lowered each time.  The lift lock was a 48 foot drop.  I don’t like heights!  But it’s a smooth ride and very quick.  We made our way out of the lock and back into the stressful boating.  The bottom of our boat is 3 feet down in the water.  Our depth finder is there.  Our props are 2 feet below that.  So when we take a reading on the depth finder we subtract 2 feet to know where the props are sitting.  So, when you read 1.7 feet on the depth finder it’s really not cool.  The weeds were everywhere and we were thankful to be reading that from weeds and not the bottom. 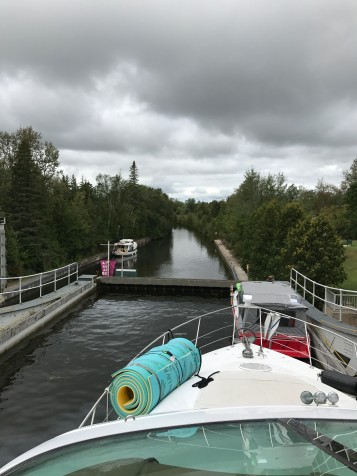 Top of the lift lock

Once we got into open water to cross one of the many lakes on our route, we had some deeper water and Ben was able to put the boat in reverse and knock some of the weeds off the props.  He did this whenever he could.  When not stressed out, the countryside was pretty.  Cows grazing on the bank.  Hole in the Wall bridge.  The sights were pretty.  Ben asked me at the end of the day if it was scenic.  I tried to snap a few pictures along the way to show that it indeed was. 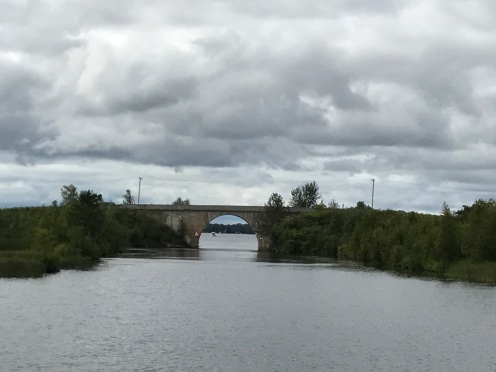 Hole in the Wall bridge

Once we made it through Locks 37-41 we were smooth sailing for the rest of the day.  But those locks were a hassle.  With towing the dinghy I had Molly taking the mid line in the lock and me at the back.  I would have to get the line for the lock settled and then pull in and tie up the dinghy each time so they could pack boats in behind us.  In one lock our dinghy antenna was tangled in a folding bike on the bow of the boat they put behind us.  I was ready to be done with those.  Ben was ready to be done with the entire day.  The boat we had been traveling with stopped after lock 40 for the night.  I wanted to push through and get to Orillia so we could just be settled.  Ben was exhausted but agreed it would be ok.  Once through those locks we took the hairpin turn into Lake Simcoe.  Lake Simcoe was beautiful and a welcome respite after the long day.

We had about 20 miles to the marina in Orillia.  We crossed the lake, went through a section called The Narrows (and frankly we were done with narrow by that point), and then into Lake Couchiching.  We got settled at the marina, which was also shallow.  Very shallow.  Ben just turned the depth finder off at that point in the day.  It was all weeds and mud again.  Ben has never been so happy to shut down the engines and get off the boat.  In total, 9 hours to travel 45 miles and 6 locks.

Did I mention it was also our 15th anniversary???  It was.  What a day!  Memorable for sure.  We got off the boat and headed into town for dinner.  We’ve never taken the girls out for our anniversary before!  We found a wonderful Italian place and instantly liked Orillia.  I had the girls snap a picture of us.  We’re tired and not looking our finest, but 15 years is a big deal and it had been a big day and all of that needed to be celebrated!  We made it through The Ditch! 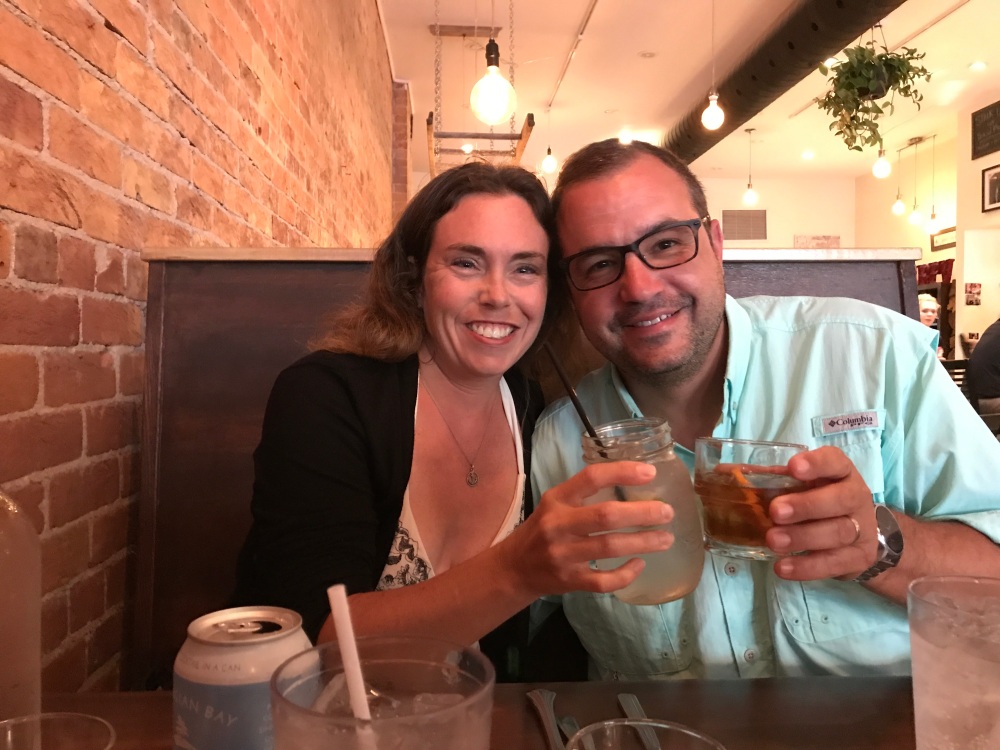