After anchoring for a night in Wrightsville Beach we headed to Topsail Island in Surf City, NC.  While anchored Ben was working in the engine room and noticed that the water pump for our generator had gone bad.  It’s a maintenance part but we didn’t have a spare on board so Ben ordered a new pump with overnight delivery to arrive in Topsail Island.  We had a pretty trip through this part of the ICW.  I didn’t get many pictures but did snap a couple just on the other side of this swing bridge.

Once in Topsail Island we got off the boat and went to find Sugar Island Bakery and used bookstore.  The Wilsons had told us about it and we were excited to check it out.  We picked up a stack of new to us books and got some delicious cookies.

After the bakery the girls were desperate to get to the beach.  I wasn’t far behind.  We have seen some amazing places recently and had a wonderful time doing so, but I miss swimming suits, water, and just relaxing!  So, the girls and I got suited up to head to the beach.  It was about 4 pm so I told them we just had an hour or so to play.  As we were heading up the dock I noticed some dark clouds behind us.  We’ve had a lot of afternoon spring storms so I checked the radar and the storm was either going to hit us or skate just below us.  Molly said she thought we should give it a try so off we went.  The beach in Topsail Island is BEAUTIFUL!  We have really missed nice beaches since coming back from the Bahamas.  The Atlantic side of FL just doesn’t have nice beaches.  But North Myrtle Beach and Topsail Island have restored our beach loving.

The girls enjoyed approximately 3 minutes in the water before the CRAZY storm moved in.  Molly kept yelling “look look”.  The girls do this a lot.  “Mommy look”.  All.  The.  Time.  So, I kept saying “I am looking!”  Pretty soon I realized she was pointing behind me.  Whoa.  I yelled to them to get out of the water immediately.  We, and everyone else on the beach, took cover.  As the wind picked up and the rain started our cover wasn’t sufficient and we ducked into the waterfront bar and restaurant we were standing next to.  I asked the bartender if we could hang out while this blew through.  She said no problem.  We were wet and cold as the wind and rain was blowing everywhere inside as well.  It was pouring off the roof and splashing everywhere.  Eventually the storm cleared and Madelyn noticed it had stopped raining.  We made a run for it.  We quickly realized that all of the streets were flooded and for some reason the town doesn’t have any sidewalks.  So, we sprinted through some rivers of water the two blocks back to the boat.  Madelyn lost a shoe at one point crossing a street but was able to grab it. 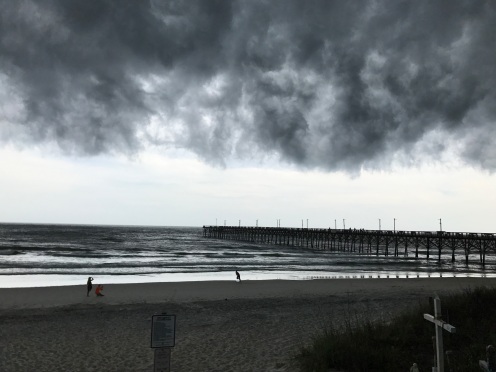 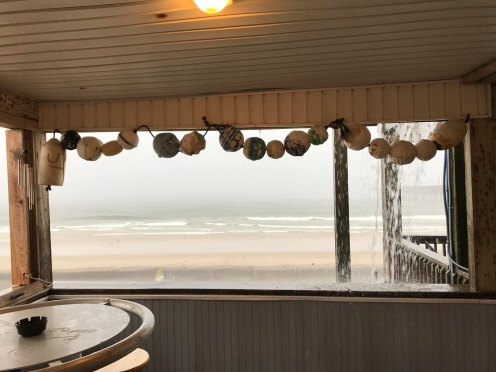 The next morning Ben was waiting for the pump to arrive so I took the girls back to the beach. Take 2!  It was a gorgeous morning.  The tide was way out so the beach was huge.  The girls were fascinated with the surfers.  Maybe this was why it’s called Surf City.  The girls jumped right on their boogie boards.  The ocean was so calm but where the waves were breaking was wild and fun.  After snapping a few pictures of them I joined them in the water.  They met another little girl who was 9 and there on vacation and the three played for a couple hours in the waves, never taking a break. 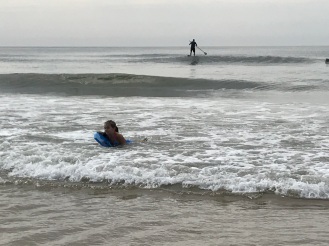 Back on the boat Ben got the pump for the generator.  However the night before when he removed the broken pump he realized it didn’t look like the one he ordered.  He was able to chat with online support and determined that since our generator was built they have designed a new pump with an adapter kit to fit our generator. Forgive my lack of any technical knowledge of any of this.  Anyway, the adapter kit was then ordered with Saturday delivery shipping to arrive in Beaufort, NC.  Once back from the beach, as the tide started to rise we pulled out and headed for Beaufort.  We had planned to anchor close by and finish the trip Saturday morning but there were no anchorages close enough to Beaufort that were also deep enough.  This section of the ICW was also quite pretty.  Beautiful huge houses right on the waterfront.  And then we got to travel through the live fire zone used by the marines.  Ben had called ahead that morning and was told that they were not doing any live fire exercises on Friday.  Phew.  When they are performing tests they close the ICW and boaters are just stuck waiting.  It was neat to boat through this area and see the targets used for practice on the banks. 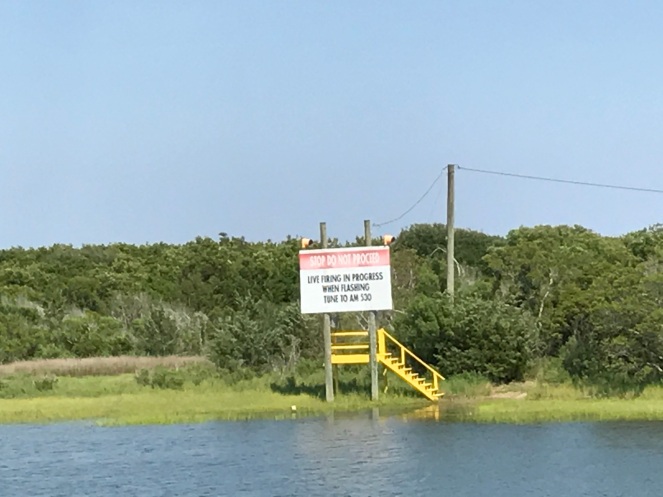 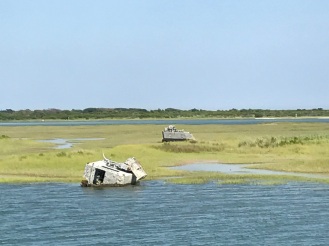 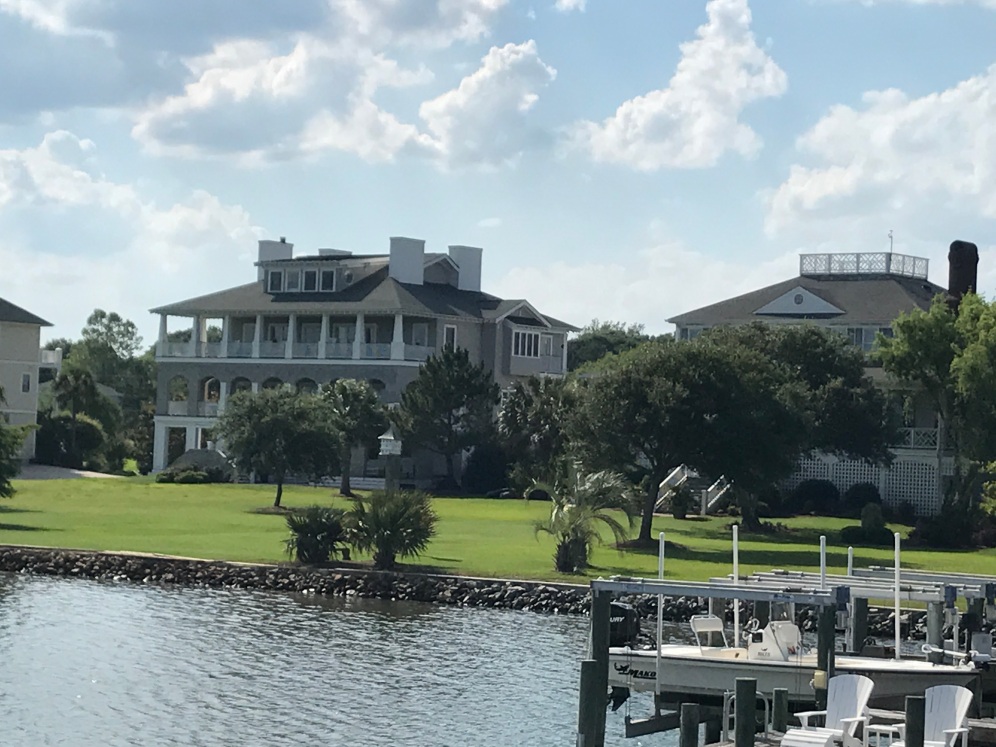 At some point during the trip the generator overheated and shut down.  Just confirmed our decision not to anchor and to get to a marina so Ben could get the adapter kit and replace the pump.  After a long day we pulled into Beaufort, NC around 7:45 PM and tied up.  Ben was exhausted.  I got the girls off the boat to run off some energy for a few minutes.  We watched a gorgeous sunset and the girls found a large grassy area to play with their Skip Its. 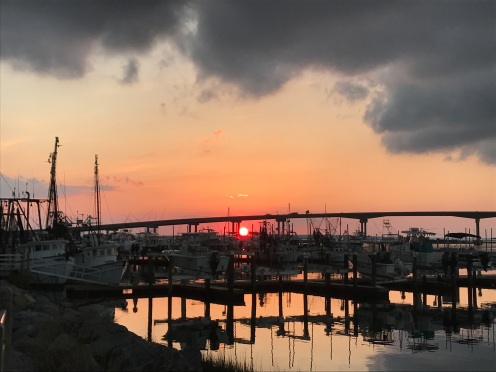 Saturday morning my cousin Michael and his wife Addi came to visit!  They live just outside Raleigh and drove over to the coast to hang out with us.  We’re so lucky that so many of our friends and family make an effort to join us on this journey.  We love having visitors and sharing this trip with so many.  Michael and Addi got married on Carolina Beach last September.  We missed the wedding because we had just set out on the Great Loop.  We boated right past where they got married on our way to Topsail Island Thursday.  We’re so happy they were able to make the drive over to see us.  They arrived with a ridiculous amount of packages we had sent to their house.  Between boating stuff and presents for Molly’s upcoming birthday they were very gracious to collect and deliver them all!  They also brought breakfast.  After we hung out and ate and showed them around the boat they enjoyed a lovely couple of hours of errands taking us to West Marine and Walmart for oil so Ben can do another oil change. 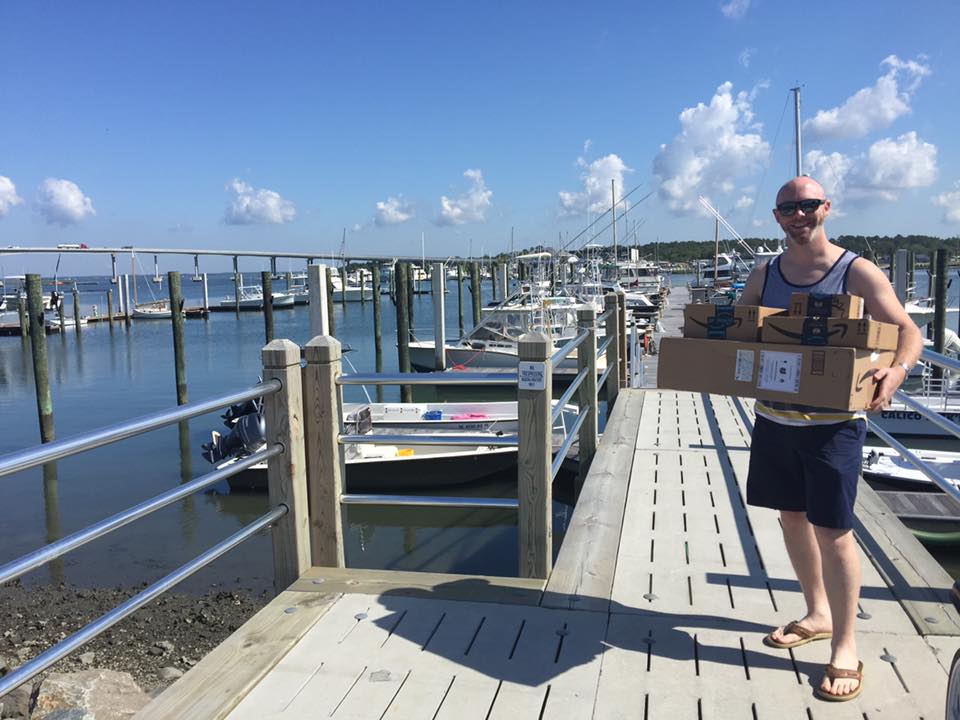 We finally made it into town for a late lunch.  After lunch we toured the North Carolina Maritime Museum.  This is a free museum open to the public and they have a scavenger hunt for kids.  So the girls completed the scavenger hunt and we learned about Blackbeard the pirate and the Queen Anne’s Revenge.  We saw quite a few cool shipping artifacts and models and animal skeletons.  Michael took a turn surfing. 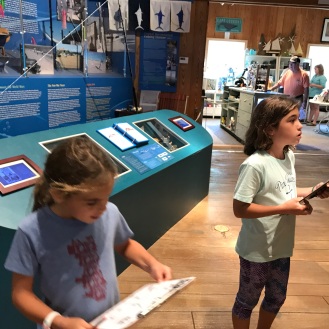 After the museum we walked across the street to watch a group of people working on building boats.  We watched them for a few and then headed to the obligatory shops for more t-shirts and magnets.  We completed our quick tour of town with a stop for ice cream for Molly and Ben and shaved ice for Madelyn. 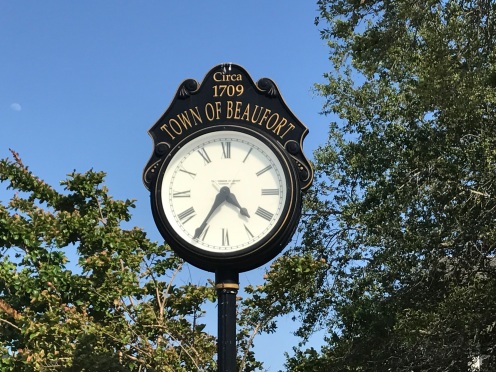 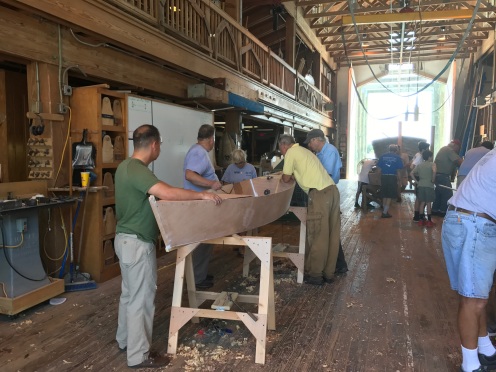 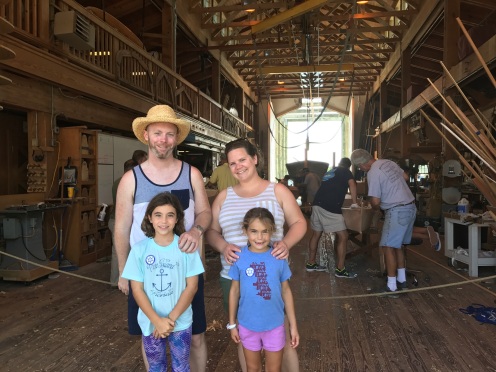 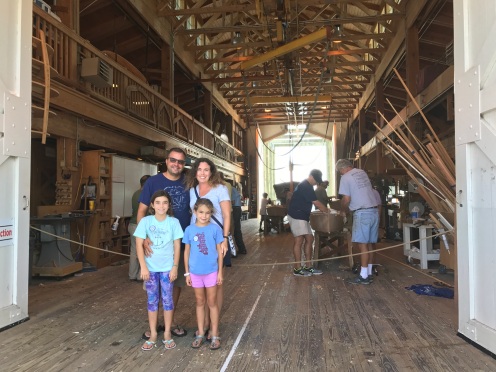 We were all full from our late lunch and feeling quite lazy in the heat so we went back to the boat and just hung out.  Ben replaced the generator water pump and let it run for a bit to make sure all was well there.  We chatted and did some puzzling and just hung out the rest of the night.  Ordered a pizza for dinner and didn’t do much else!

This morning Ben put the dinghy in the water as soon as he got up.  We all hopped in and headed over to Carrot Island.  This is a long stretch of land right across from Beaufort and we noticed a lot of people there on kayaks and other beached boats.  Michael and Addi told us that a lot of the small water taxi ferries will take you to Carrot Island and Shackleford Banks.  I had read in the guide book that there were wild horses!  Since we were still feeling burned by not spotting the horses at Cumberland Island we were determined.  We rode around in the dinghy for a bit and Molly spotted them!!!  We pulled up to the marshy land but didn’t get out.  We watched them from afar and I got the best picture I could.  Madelyn was so happy to finally spot them!!!

Then it was time for the beach!  What a perfect day.  I’m so happy that we have had 3 beach outings in the past week.  I’ll say it again – we’ve missed chilling out at the beach.  The water was 81 degrees.  The beach was beautiful.  This is our favorite type of beach – find a stretch of sand, pull up the dinghy and hop out.

Tide was out so there were tiny crabs running all over the sand.  Addi picked one up for Madelyn to see. Michael and Molly made a bee line for the water on the other side and were fully in before I could tell them about the crabs.  We all ended up in the warm water.  Addi, Michael and the girls played catch with Molly’s bounce on water ball.

Then Addi kept exploring and found a live sand dollar!  The girls learned all about sand dollars in the Bahamas but we were only able to find the white ones which are not alive.  But today the girls got to hold and touch one that was still alive.  VERY COOL – thanks Addi! 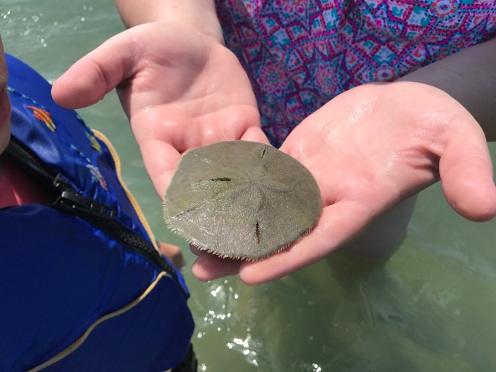 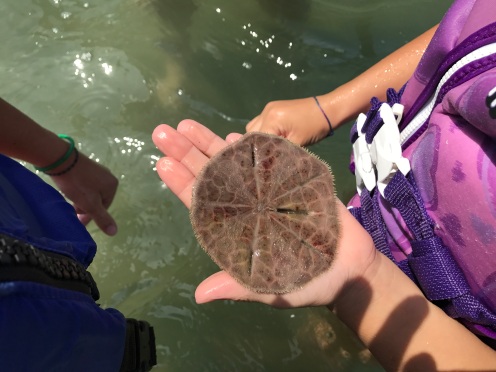 After a fabulous morning we said goodbye to Michael and Addi.  We were fully in beach mode and ready to head back to play some more when we thought we should glance at route, tides and forecast.  Reality set in.  I wanted to just pull out of Beaufort late afternoon and go to a close by anchorage so we had a little jump tomorrow morning.  We had planned on a long day from Beaufort to Belhaven.  But the forecast showed storms for Monday and Tuesday and rain Wednesday and wind moving in.  Dreaded wind.  So, we quickly made a new plan and decided to head to Oriental, NC today.  It got us 25 miles north so that our run to Belhaven will be shorter.  We are in a marina with a nice pool so that if there is a break in the storms the girls can swim.  The forecast is now much improved but we will stay until the winds and water calm.  Oriental is on the Neuse River.  It’s a pretty wide body of water and the winds are whipping up it right now rocking us pretty badly.  We are safe and sound, but it’ll be a noisy night.  We have 11 miles on the Neuse River before we enter Pamlico Sound.  We are in a stretch right now of rivers and sounds that are more like Lake Michigan than they are the narrow stretches of the ICW we’ve been on.  So, we’ll keep an eye on the winds and waves and go when it’s comfortable.  After Belhaven we’ll head to Coinjock and then to Norfolk, VA which is mile 0 on the Atlantic ICW.  Then we’ll enter the Chesapeake Bay!