We had an easy ride between Savannah and Beaufort.  We’re in a big stretch of places that other loopers have told us are not to be missed.  Savannah and Charleston were both on our list of course, but we didn’t know much about Beaufort, SC.  First, there is also a Beaufort in North Carolina.  The Beaufort in South Carolina is pronounced “bew” like “new”, or “beautiful Beaufort” as I read in someone else’s blog.  North Carolina has  “bo-fort”.  So, as we were on our way to “bew”-fort this little guy hopped on board.  He just hung out for awhile and then flew away as gracefully as he came.

We pulled into the marina and quickly got off the boat to enjoy the charm and see what this place was all about.  Beaufort, SC wins the award for best waterfront we’ve seen in a long time.  It was beautiful and welcoming.  Lovely sidewalks, swings everywhere, a big amphitheater area, tons of room for the girls to scooter, a playground and a number of restaurants whose back patios back up onto the waterfront park with lovely views and a wonderful atmosphere.

We had heard about all of the history and famous antebellum houses here.  We strolled around a bit and found some of them on our own.  They are gorgeous.  Absolutely gorgeous. 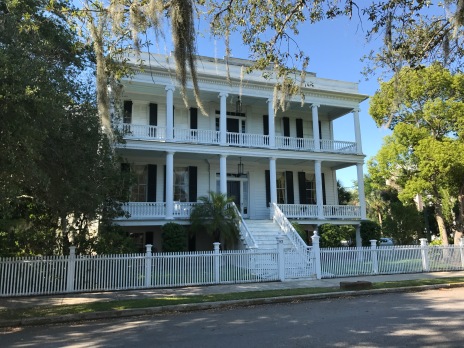 We then settled in for dinner at one of the waterfront restaurants.  After school earlier in the day the girls made slime.  They were so excited to finally get a batch made (we didn’t have Borax on board so they had to wait until we bought some).  They pulled out the slime to play with while we waited for our food.  Our waiter stopped by and said it was pretty cool and asked if they made it in school.  Molly has the answer down pat…”no, we are being home schooled and are living on our boat traveling around the eastern third of the United States”.  The usual reply is “wow that is so cool”.  This time our waiter also said that he was homeschooled through 8th grade and that he only went back to play sports.  I am continually comforted that we are hopefully doing alright by our kids as we meet more and more people who were and are home schooled.  On that thought, it’s almost summer break!  Side note — the girls only have about a week of their math curriculum left and then we’ll taper off for summer!!

After dinner the girls ran around in the grassy park and we all took turns on the swings.  What a beautiful night!

Wednesday morning we headed to Blackstone’s Café for breakfast.  Another not to be missed spot.  Had a great breakfast and everyone was happy.  French toast, pancakes, omelet and corned beef hash. And as any great greasy spoon is, it was fast and cheap and GOOD! 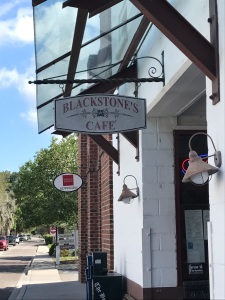 After breakfast we hopped on a carriage tour.  We wanted to get some of the history of Beaufort and decided the girls would do better on the 1 hour carriage tour than the 2 hour walking tour.  Madelyn has been begging to go on a carriage ride!

Our tour guide was fantastic (as was Angus our horse!) and gave us a lot of the history of Beaufort.  We got to see a ton of the famous antebellum houses along with stories about their original owners.

The history here is rich.  We also learned about important parts of history like the life of Robert Smalls, raised as a slave in one of these houses.  His masters taught him to read and write as a young boy. Against the law, but they did it anyway.  He went on to become a ship’s pilot and work on one of the large Confederate ships during the Civil War.  He was very intelligent and would read all the memos that came through the office unbeknownst to the captains of the ship.  He eventually freed himself and his crew by taking over a Confederate transport ship and sailing it from Charleston Harbor to the US blockade.  This helped convinced Abraham Lincoln to accept African American soldiers into the military.  Once the war was over Smalls went back to Beaufort.  After the war many of the buildings and houses were put up for auction.  Robert Smalls bought the house he was raised in.  His owner was still alive and in ailing health. He took her in and cared for her until she died.  Pretty powerful story for our girls!

In addition to the history the houses were fun to look at.  Bright colors.  Unique features.  In St. Augustine we learned about coquina – made from sand and oyster shells.  Here in Beaufort houses were built using tabby.  Similar material that was made from lime, sand, oyster shells and ash.  Very strong and wouldn’t burn down.  We learned that taxes were charged based on porches and chimneys.  So HUGE mansions with 6 fireplaces would have 2 chimneys, each with 3 chimneys funneled into one.  And porches were only considered porches if they had a front staircase and door.  So instead houses were built with their stairs and door on the side of the house and the big beautiful southern front porches were just for sitting and relaxing.

We also heard about the movies such as The Big Chill and Prince of Tides which are just a couple among many filmed here.  We heard a story about two teenage boys smoking cigars in their barn.  They heard footsteps of an adult coming and put the cigars out, sparking the hay in the barn and starting a fire that would go on to burn down 44 houses due to embers landing on the roofs.  This barn is now a Best Western constructed of brick.  We saw some of the not as pretty parts of the houses.  Below is a Dependency House.  It is attached to the main house by a continuous wall and is where the house staff and slaves lived.  The house was “dependent” on the folks in these houses.

We learned about Angel Oak trees.  These incredible trees have branches that come down and touch the ground and then rise up again.  And finally we learned that the roofs of the porches were almost always painted a color of the sky – light blue, light green or sometimes yellow.  Our tour guide said this was to keep both ghosts and bugs away.  Apparently the bugs think it is open sky and fly away.  Sure enough the more we looked the more we noticed mostly blue/green porch ceilings.

We had a lovely time in Beaufort, SC.  The carriage ride was great.  The girls loved having time and space to run and scooter and just play.  We had a relaxed schedule which was a nice respite after trying to fit everything in while in Savannah and then our quick trip back to the Midwest.  A couple of great days of rest and relaxation!