Wednesday morning we left Marsh Harbour early and got fuel and then headed to Man O War for a day or two.  We got fuel in Marsh Harbour since this was the cheapest place to get fuel in the Abacos. We wanted to fill up since we think we’ll head south to the Exumas.  Looking at the weather patterns we now wonder if we will do that after all.  To which Ben said today….we wouldn’t have filled up there if we thought we might head north instead of south…pricey fuel!  Jello plans again!  Who knows where we’ll end up.

We pulled into Man O War after traveling 6 miles.  I love that these islands are all so close together!  Man O War is the first island to have a more prosperous feel to it.  The other places we’ve been haven’t at all felt impoverished, but Man O War had a distinctly different look to the houses and the area in general.  And it is VERY VERY small!  After looking at the weather we decided we’d get there Wednesday morning and spend the day exploring so that we could head to Hopetown on Thursday instead of Friday. There was a big front with a LOT of wind moving in and we wanted to get to Hopetown before that happened.

We spent the day popping into the cute boutiques and watching the people working on boats in the boatyards around town.  Ben was impressed with the marine railroad that one of the boatyards used.  He explained to the girls how it worked to pull the boats out of the water.  We made our way down to the sail shop to watch the women sewing canvas bags of all shapes and sizes.  I did take note of the gender roles.  The men work on the boats in the big boat yards and the women sew the canvas bags.  Regardless of that, it was neat to talk to them and watch them work.  The girls love playing with and petting any cat and dog they find.  The lady in the first picture had a cat curled up sleeping on the corner of her desk.  The girls found out her name is “kitty”. 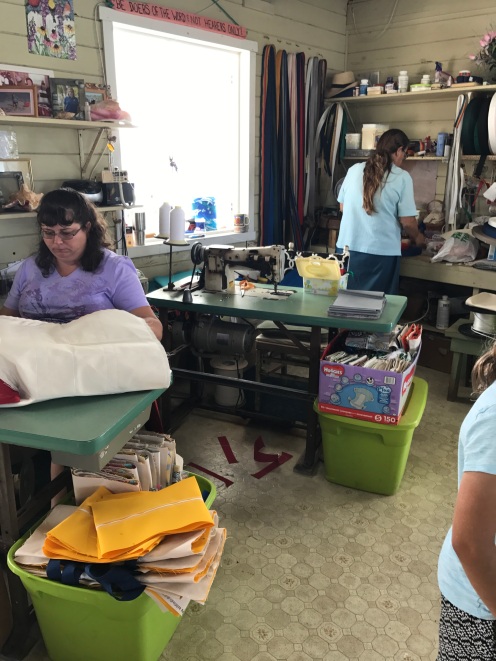 We told the girls they could each pick something out.  We had no idea the prices on these bags!  The idea is they are made from the canvas and sail materials from sail boats. There were a lot of cute patterns that were probably not sails but you get the idea.  Once we got an idea of how much the bags cost we scaled back on what they could pick from.  Cute little canvas wristlet sized bags and lots to choose from.  Madelyn has lots of trouble making decisions!  Molly got a wristlet sized canvas bag. Neither picked one with the wristlet strap.  Madelyn ended up picking one of those and a little coin purse she just HAD to have with the agreement that I put one of them away for her birthday.

There are two restaurants we had been told were good on the island. We went to one and had a nice lunch.  Then we walked up the big hill and looked around the neighborhoods some more.

Maddy took this one! 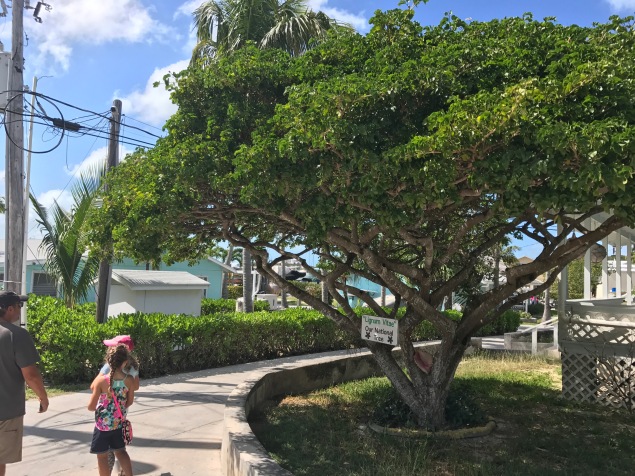 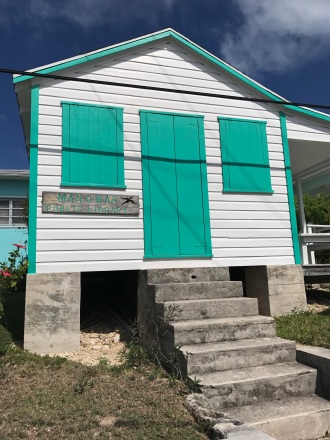 We headed back to the marina and tried to track down the fellow boater who is teaching in the local school.  We found her boat but not her.  I got up early Thursday morning to go for a walk and noticed she and her husband were in their boat so I went over and said good morning.  She talked with me for quite awhile about what she’s doing and what all she has studied with the kids.  It was really interesting.  And it had a lot of overlap with what we’ve been doing with the girls.  She did a big study with the kids on the ocean reefs.  That is one topic we haven’t covered yet so it’s on my list.  She and her husband lived on their boat and home schooled one of their sons when he was 15.  And she taught.  She asked how old the girls were and said that she taught 4th grade for  few years and it was one of her favorites.  Anyway, she was heading out on a deep sea fishing trip that day but told me that I’d be more than welcome at the school and to just drop in.  So, I walked up the hill and found the principal who also teaches one of the classes.  She said we could absolutely bring the girls by.  The girls wrote blogs posts about visiting the school so I won’t say a ton here and will just post a picture or two so I can put  the rest in their blog.  But I’ll just say that we all thoroughly enjoyed our visit.  The kids in the upper grade classroom did their science presentations on the atmosphere and solar system for us.  And it was a lot of fun to see that all the way in the Bahamas the local school looks a lot like the school classrooms in Chicago….just smaller.  And the principal was so welcoming. She teaches the 4-5th grade class and said many times that Molly was welcome to stay or come back another day and join them.  We’re hoping to go see the local school in Hopetown tomorrow and check out some similarities and differences.

A number of these islands are still largely inhabited by descendants of the original loyalist families that settled here.  In Green Turtle it was the Lowe family.  In Man O War it was the Albury family.  The Albury family built boats and if you look around the Abacos you see their name everywhere.  All of the inter-island ferries have the Albury name on them. We’ve seen a number of other boats with the Albury name. And in the 4-5th grade classroom 4 of the 8 kids had the Albury last name.

After our school visit we pulled lines and headed out for the 4 mile trek to Hopetown on Elbow Cay.  It was already incredibly windy!  We’re in Hopetown for at least 5 nights so I’ll cover all that we’ve seen and done here in my next post.