So much exploring to be done.  It will be a week tomorrow that we crossed over to the Bahamas.  We spent 4 nights in West End at Old Bahama Bay waiting out winds. The resort had kayaks, paddle boards and bikes all just there and available to use.  Thursday after we finished school the girls were so excited to kayak. Unfortunately I didn’t have my camera out on the kayak with us.  The water was so clear and they both did a great job helping to paddle.  We spent the rest of the day at the pool and playing on the shuffleboard, chess and checkers courts.  Fresh conch salad for lunch by the pool.  Fresh stone crab for dinner that Ben bought from someone selling it on the dock.  He also bought a conch shell.  It’s huge and pretty and SO SO LOUD! 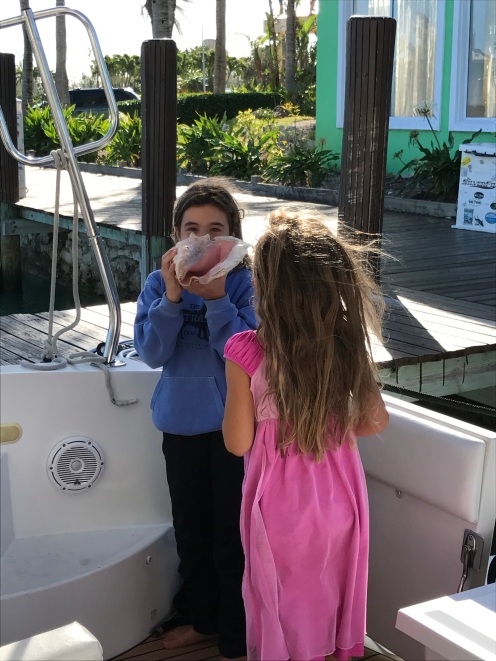 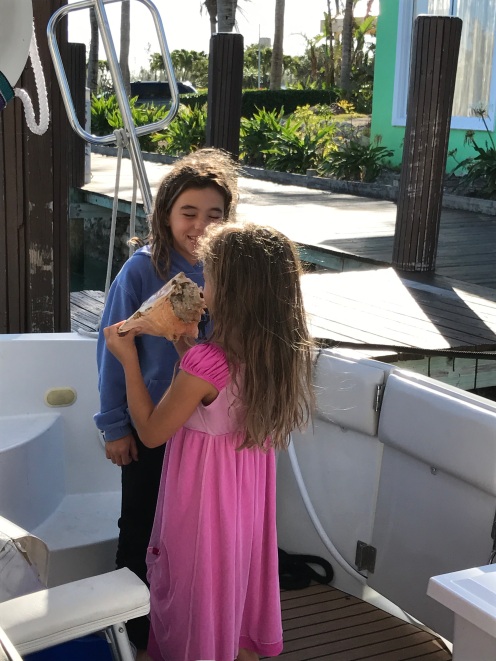 Friday after school Ben got the girls’ bikes down and we grabbed bikes from the hotel.  We rode out of the resort and around one of the housing developments next door.  We all love the colors of the houses.  It’s so bright and cheery.  We think Chicago homes would be prettier painted these colors. 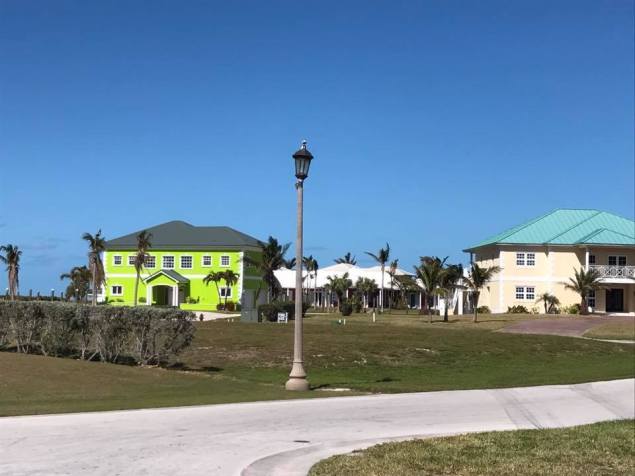 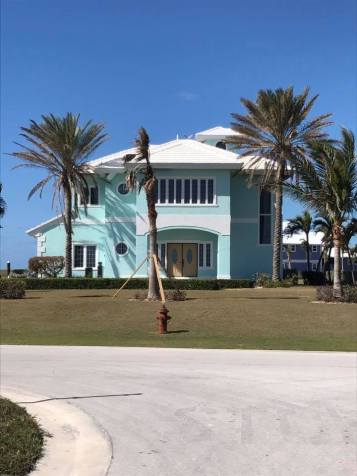 On the advice of others at the marina we rode past all the houses and hopped off to walk down to the beach to collect sea glass. 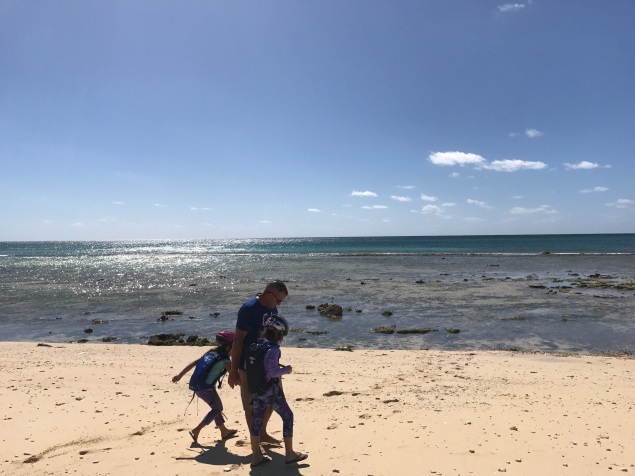 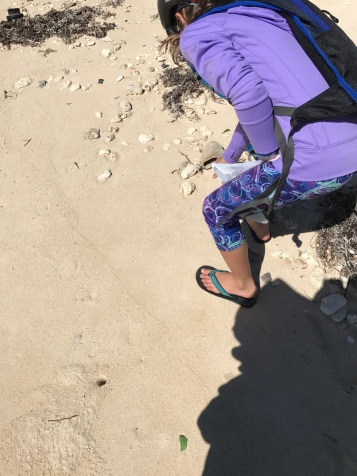 Maddy wanted to bring the entire beach home.  We rode on a little further through a development that never happened.  Beautiful roads, brick sidewalks, fire hydrants, street lamps, a club house, golf course….and then nothing.  Road ends in this circle drive with not a single house ever built.  I commented it’s so interesting to me…most places in the US the lots would be sold and the houses built long before the roads and sidewalks were put in.  We ditched our bikes at the end of the road and walked down to the beach again, this time for shells.  The tide was way out and it was a beautiful day on this side of the island. 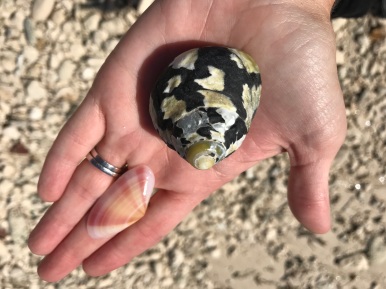 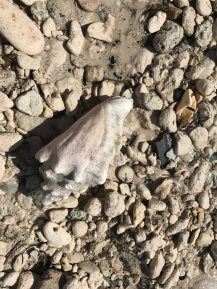 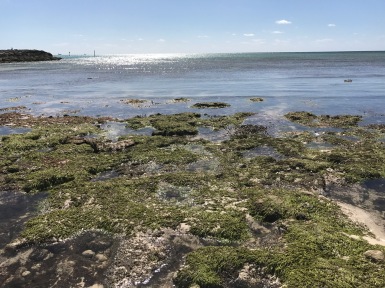 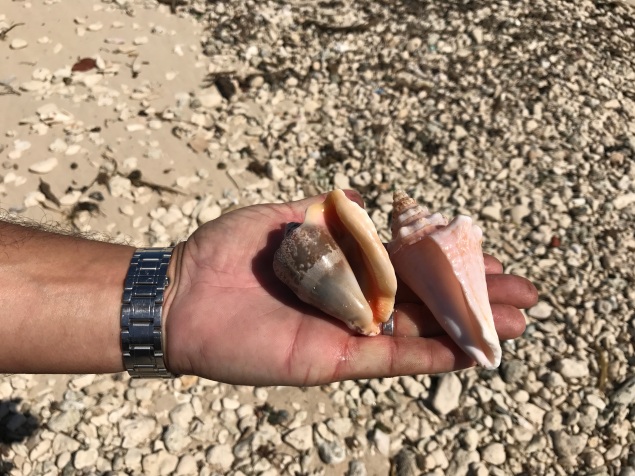 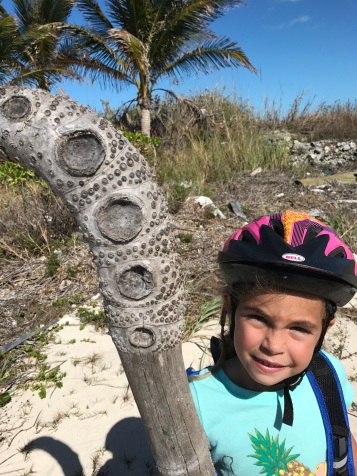 West End was hit by Hurricane Matthew last October.  Ben rode into town to the store Saturday afternoon and saw just how destroyed it still is.  So sad that it is so hard to recover for many of these smaller countries.  As it is many places in the US as well.  The marina and hotel barely got hit however were under water for 3 days.  The power has been restored to the hotel and marina offices but the marina phones don’t work and there is no power to the slips.  This meant a huge discount on docking but for them is sad and a real problem.  Ben talked to the owner a few times.  They are hoping to have every power pedestal pulled and replaced and back up and running by April 1st.  Ben doesn’t think that will happen.

I don’t think I got any pictures of it but the entire time we were in West End there was a sailboat stuck aground in the bay.  We watched for four days as they tried to get the boat unstuck.  No luck.  On day four the owner gave up, gave the boat to a local and flew home.  As the tide would change we would watch the boat lie almost completely on its side and then the next day lean the other way.  They were not in a recommended anchorage, but even so, it was a quick reminder of just how fast the tides change here and how shallow the water can be. Boating here is beautiful and yet stressful all the same for Ben.

We pulled out Sunday morning with a group of 4 power boats and 4 sailboats to head through Indian Rock channel.  A dicey passage that had good depth at high tide but has currents that can pull you to the side and into the rocks. We followed a large catamaran who has been sailing here for years and knew the way.  Once through, the sail boats put up sails and dropped off to the right of us and the power boats motored ahead to Great Sale Cay.  Beautiful day on the water and beautiful anchorage.  The water while getting there was like glass and at 20 feet deep we could see the bottom while standing up on the fly bridge.  Ben saw turtles and sting rays while driving. Other boats saw dolphins and sharks, we missed them unfortunately!  Once anchored and settled Ben got down the dinghy and we cruised around.  Before cruising he got the water maker running.  It has added to our boat clutter but is great to be able to pull in the salt water, purify it and fill the water tanks without relying on a marina. 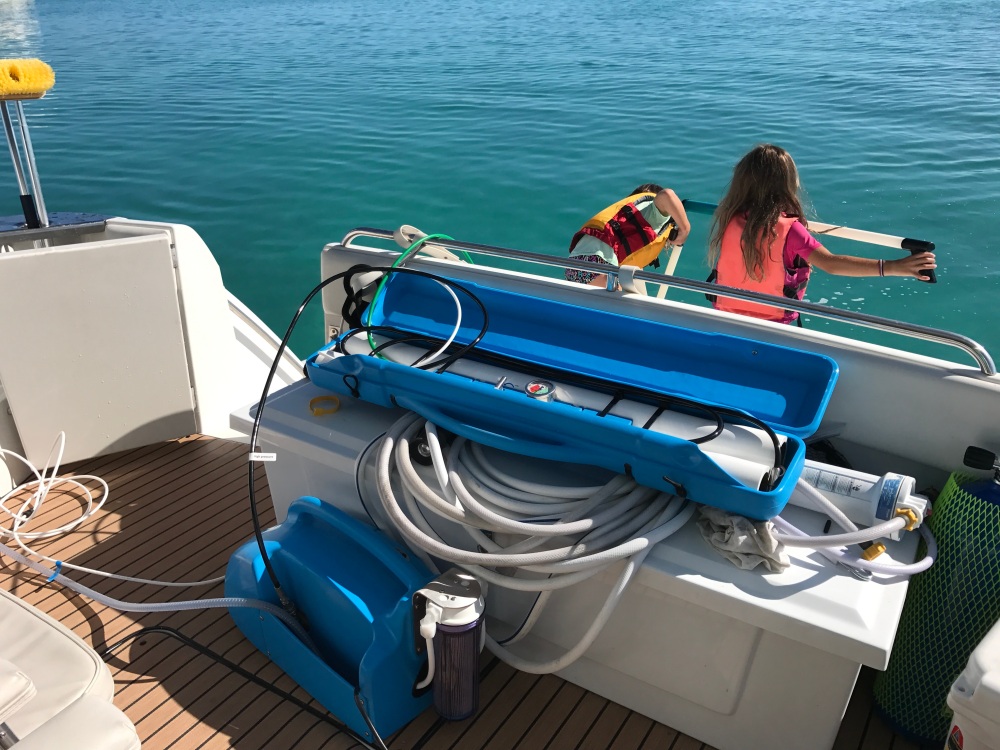 Once in the dinghy we saw starfish and sponges under water.  I can’t say enough how incredibly clear the water is.  We had a great dinner, watched an amazing sunset and looked at the stars.  And then we went to bed as the winds shifted and so began a night of not sleeping. Yikes.  At one point I got up b/c I was convinced we were blowing away.  Not so much.  All boats were still anchored where we started and there was hardly a ripple.  It’s a mystery why on earth it was so loud.  But we didn’t sleep.  We talked to the other boats the next morning and most had the same issue.  Thankfully the girls slept through it.  We set out early because we were all up. 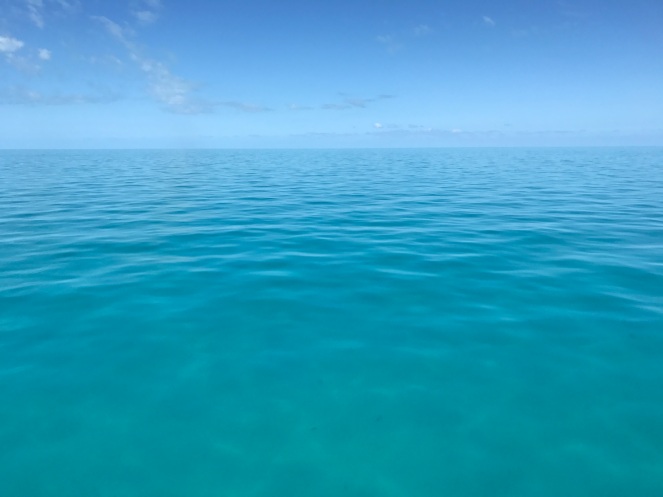 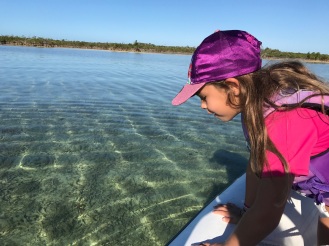 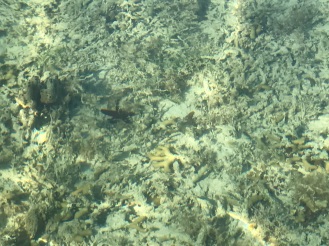 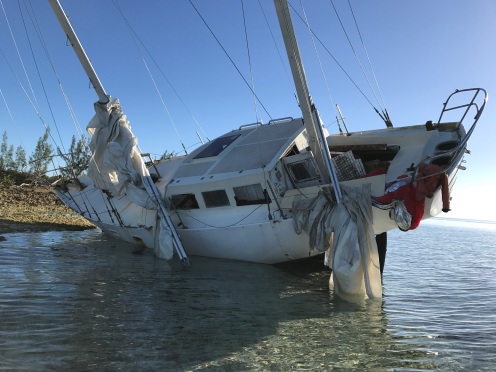 We’ve seen a lot of abandoned boats like this 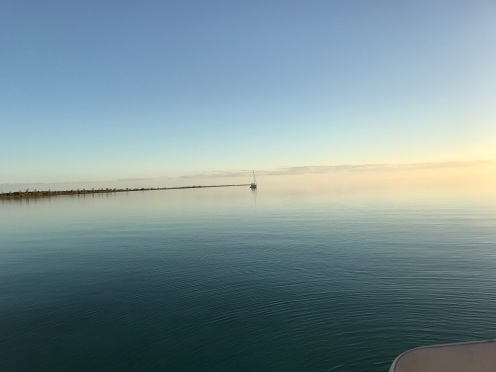 Our group broke up a little yesterday and headed different places.  We and two other boats came to Green Turtle Cay. We had planned to make one or two other stops along the way but with winds moving in last night and then again tomorrow we decided to just come here and stay put until Friday.  We started slow to save fuel and then Ben picked up pace the last 20 miles to get in at higher tide.  Seeing the boats come in after us he was happy he did that.  Boy does the tide drop fast and a lot.  We are at Bluff House Beach Resort and Marina for four nights.  As frequently happens we pulled in, others came to help.  A couple of people saw our Loop flag and asked if we are doing the loop.  Ben handed them a boat card and we got the “We know you – you have Molly and Madelyn”.  Yes we do.  Funny how many people know who we are when we arrive because of the girls. They went on to tell the girls they have been following them.  It’s good motivation for them to keep writing!

Docking is always an adventure.  This time our boat backs up to the dock and we have a ladder we have to climb up.  This morning at high tide it’s quite manageable.  Last night was a bit crazy. Ben basically lifts and pushes the girls up.  It’s a very vertical ladder on the side of the dock and requires being quite careful. Yesterday we went into town with the dinghy and walked around a bit.  We will head back today or tomorrow to hopefully check a few of the sites out.  We visited two of the tiny grocery stores last night (picked up brownie mix because the girls asked to make a Valentine’s Day treat) and saw some more colorful houses.  We decided the turquoise and pink one was our favorite.  We also walked past the post office and library.  We had dinner back at the hotel restaurant.  The rum punch here means business.  Tasty stuff! 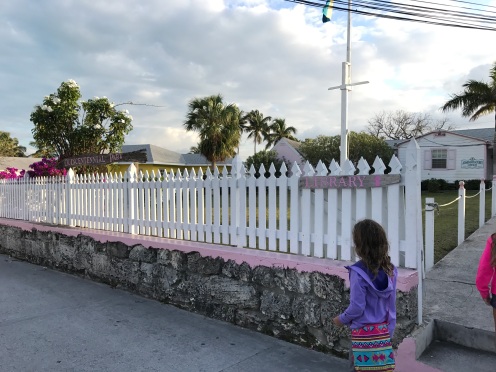 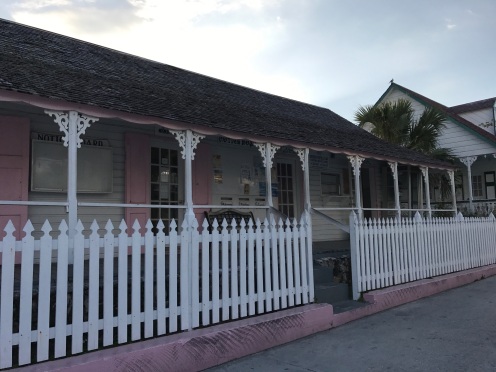 Today is Valentine’s Day.  The girls are lamenting not being able to exchange cards with friends.  But they got up this morning and were happy to see a few treats waiting for them and then they made us lovely cards with really sweet notes about taking them on this trip.  We managed to make it to see second cousins for Halloween and saw all our family at Christmastime so this is the first holiday they have been affected by not being with kids.  But we think they’ll do alright.  We made Swedish pancakes with all the fixings for a special breakfast and are having stone crab again for dinner.  They have a heart shaped cookie cutter and we have red sprinkles left over from Christmas cookies so we’re going to make brownies and cut them into heart shapes later. 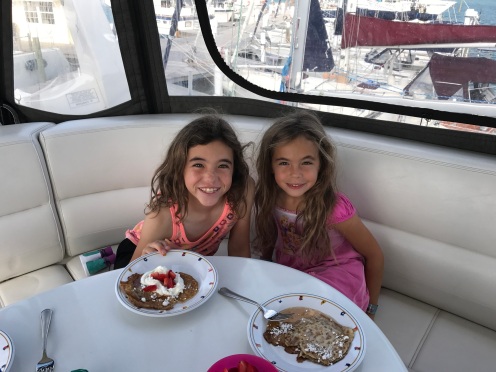 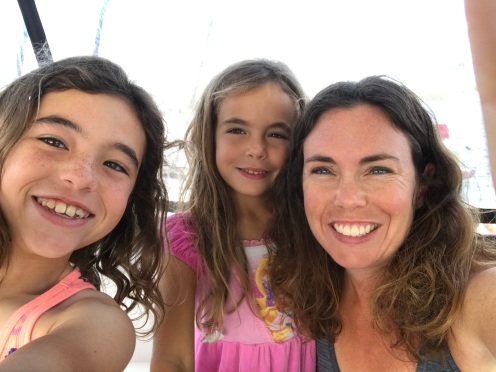 We’re here until Friday and then moving along.  Next on the list are Treasure Cay, Great Guana Cay, Marsh Harbour and Hopetown to finish out our tour of the Abacos Islands.