As seems to be our habit now both Laura and I have started our recent posts with regret about not posting more often.  A lot has happened since I last posted so I’ll try and cover all of it.

As Laura posted about we ended up being off the boat for two weeks while it was being repaired.  It turns out the damage from our time on the sandbar on the Tenn-Tom was a little greater than I’d hoped would be the case.  The primary damage was to the port side of the boat.  At some point during our sandbar adventure we bent the port rudder forward.  That means we hit it going backwards hard enough to bend the stainless steel shaft at about a 15-20 degree angle.  Additionally a part inside the boat that helps locate the rudder was cracked.  Shortly after we left the boat I got a distressing phone call from the yard indicating we needed a new rudder and the rudder table (the part that locates the rudder) was cracked.  The distressing part was that the rudder had a lead time of 6-8 weeks and the rudder table was no longer made, the result of a dispute between carver and the manufacturer of the part.  Fortunately I was able to talk to the manufacturer of the rudder and determine they had one in stock that could be modified for our boat.  The other part would need to be made by the yard. 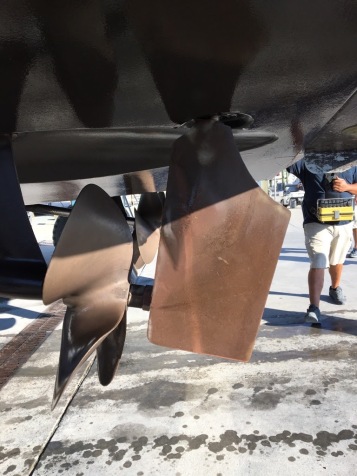 With this sorted, the propellers sent to the prop shop and the shafts at a machine shop being straightened we had clarity it would take about two weeks to fix the boat.  With that in mind we decided it was a good time to head to Disney World.  So, we made our deal with the large rodent and headed for Orlando for five days of parks.  Laura wrote more about that but we had a good time and the girls did better than we expected.

Once we returned we were able to spend some more time with Tom and Janet, Tommy, Patty, Kato and Naali and Sarah, Adrian and Judah.  We had Tom and Janet ride with us from Pensacola to Destin and then Tommy, Patty, Kato and Naali from Santa Rosa Beach to Panama City.  From Panama City we headed to Apalachicola.  We really enjoyed Apalachicola.  It’s a historic town with a large oyster industry and a cute downtown.  We spent about 24 hours there and enjoyed our time walking around, exploring maritime antiques, a soda fountain and good eating. 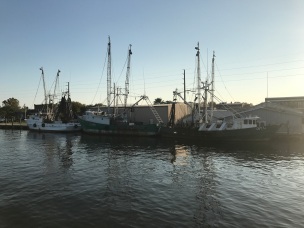 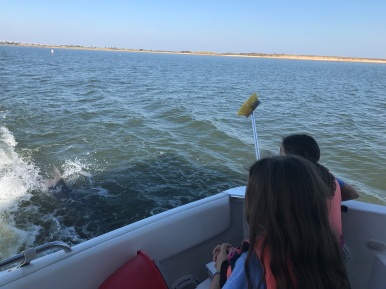 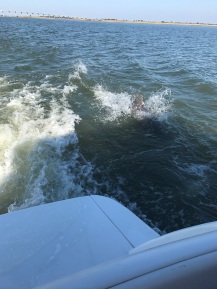 We left Apalachacola around 1pm and headed for an anchorage in the lee of Dog Island just off of Carabelle, FL.  We spent the night there before waking up before first light to begin our crossing. 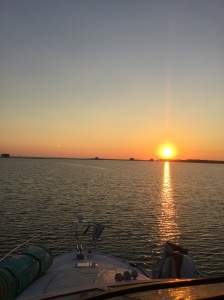 We had planned to run with another boat, Perfect Timing, a 50′ Hatteras who typically runs about 17.5 kts at fast cruise.  We typically cruise around 21-22 kts so we knew we would be a little quicker but agreed with Perfect Timing it would still be better to have another boat out there than going entirely solo.  As it turns out when we woke before first light they had already left.  We caught up with them a couple of hours into our crossing.  We left in perfectly flat water and ran the first three or four hours with nearly calm waters.  Around the time we caught up with Perfect Timing we heard a very loud boom.  I suddenly became concerned as I knew the military conducts live fire exercises in these waters.  I first spoke with Perfect Timing and confirmed they heard the noise as well and also didn’t know the source.  I then called the Coast Guard and gave them our position and inquired about any potential exercises in the area.  After standing by for about ten minutes the Coast Guard came back and said the Air Force was conducting dog fighting training and what we were hearing was sonic booms.  Sonic booms sounded a lot better to us than bombs.  As we continued on the seas built a little to the point we were seeing steady two footers with occasional 3-4s.  It wasn’t uncomfortable but did cause us to spin up the stabilizer.  As we got closer to shore the seas calmed a little and by the time we were close to St. Petersburg the seas had calmed again. 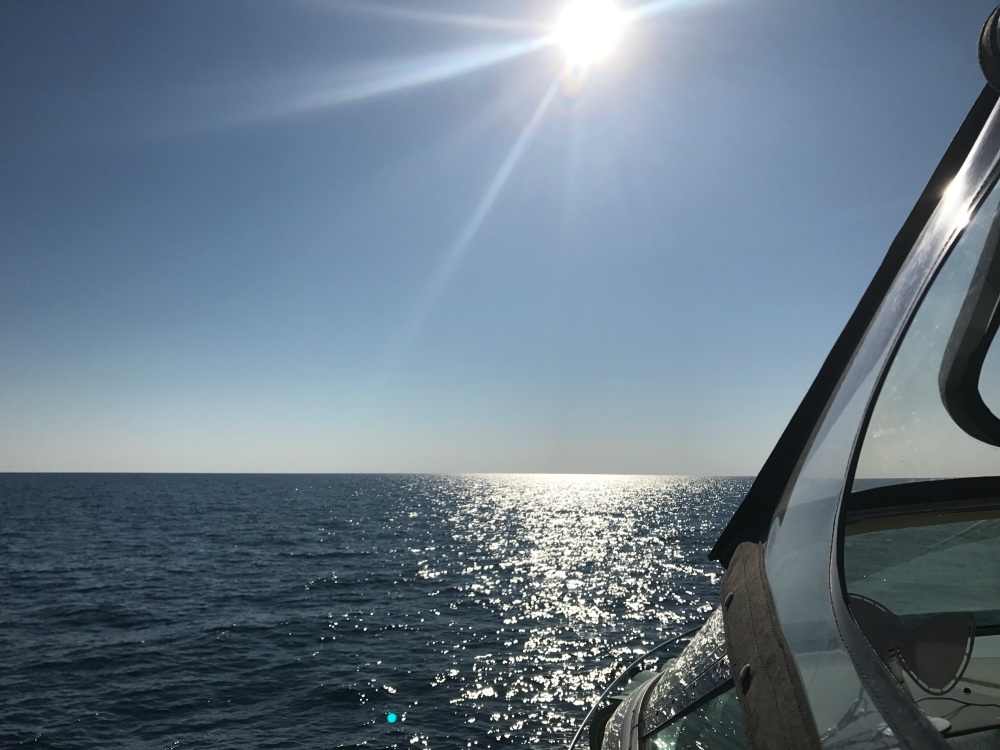 As we were pulling into the markers for the North Pass I turned to Laura and commented how it was kind of hard to believe that we’d gotten our boat all the way from Chicago to St. Petersburg.  While we were in the pass Mike Rowe from Rowe Boat called us on the VHF to let us know he was out in his dinghy and would lead us in to the Pasadena Yacht Club where Mike had been kind enough to arrange dockage for us for the month.  We were happy to have Mike’s knowledge of the area as we followed him in.  The approach was fairly easy but would have been made a little more stressful by not being sure what area to hug when for the deepest water.  We also were aided by coming in on a rising tide.  We tied up the boat, plugged into shore power and shut down the engines.  We’d traveled 197 miles in 8 hours and 41 minutes, averaging 19.75 knots.  A pretty easy crossing.

We’ve spent the last few days doing some chores on the boat, cleaning up, resupplying, and relaxing.  The girls have been able to swim two of the three days we’ve been here and we’ve done some exploring.  Thursday we will go to the yacht club for Thanksgiving Dinner.  Friday Grandma Cathy arrives and Monday we will go see Laura’s Grandfather Charles.

We will be here for about a month before heading further south to Fort Meyers for the holidays and further visits with family.