We left!  Last night was kind of a late night for Laura and me taking the final load of stuff to the boat.  This was the first time we took stuff to the boat and just couldn’t put everything away.  Most of the storage on the boat is pretty full at this point.  Laura spent much of today’s time underway trying to put things away.  She did pretty well but is still bothered by the stuff that’s out.

We had an amazing show of support at the dock today.  Mema, Pop-pop, Grandma Cathy, Grandpa Jim, Max, Kyle, Sophie, Zoe, Kathy, Livia, Claudia, Sabina, Ron and Ozzie all came to see us off.  Some tears were shed, we said our goodbyes and pulled out of Burnham.  Sophie, Zoe and my dad joined us for the day.  I was very happy to have my dad.  Today was a lot of logistics and moving around the boat and it was great to have him.  Zoe was a little reluctant to join but even if she’s reluctant to admit it, I think she had a good time.  Sophie also had a good time but was more willing to admit it. 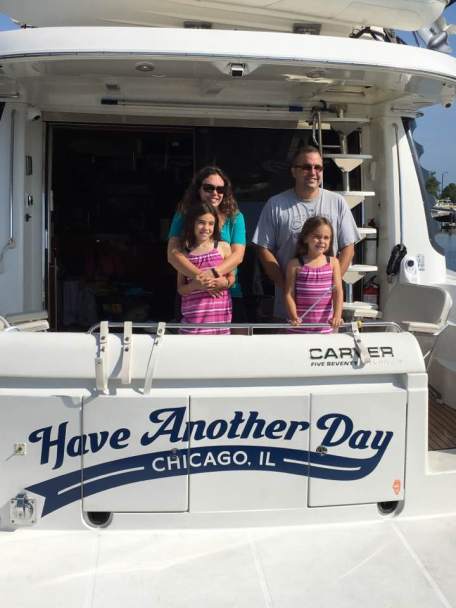 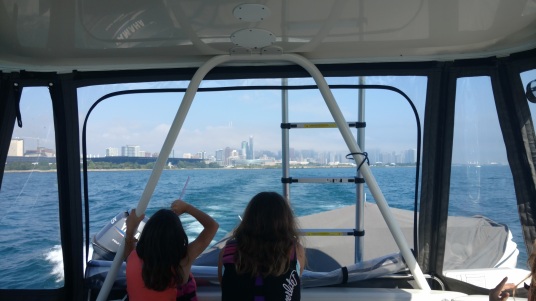 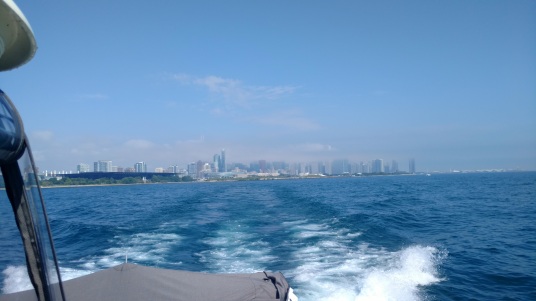 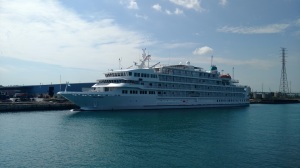 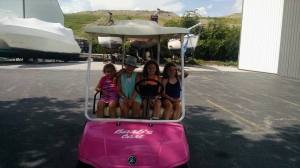 After a brief stop at Marine Services to verify the measurement from the water to the hardtop we continued on the Cal-Sag to the Illinois Sanitary and Ship Canal. Once on the Sanitary and Ship canal it was a short three or so miles to the 19′ bridge.  The forecast today was for rain which meant the water reclamation district let water out of the pool this bridge is on in order to insure there wasn’t flooding from the rain.  This meant we had an extra foot of clearance and sailed under the bridge without doing anything other than lowering the antennas.  A huge relief. 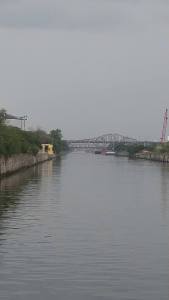 Once clear of the pain-in-the-ass bridge it was on to our second lock of the day and our first big drop lock.  This was the Lockport lock and damn.  A drop of roughly 40 feet awaited us.  We waited about 15-20 minutes and while waiting caught up with the Katie B, the first other looper boat we’ve encountered.  After our short wait we watched the upper gate drop straight down, the first time I’ve seen that lock design, and then heard a blast of the horn and pulled into the lock.  Once there we tied up to a floating bollard that would make the 40ish foot drop with us.  At about the same time the rain picked up and my poor dad got rained on.  For being a 40 foot descent it was a great deal less fanfare than many of 2-4′ lock-throughs in Chicago and at the O’Brien locks.  There was no turbulence from the water and very little movement of the boat. 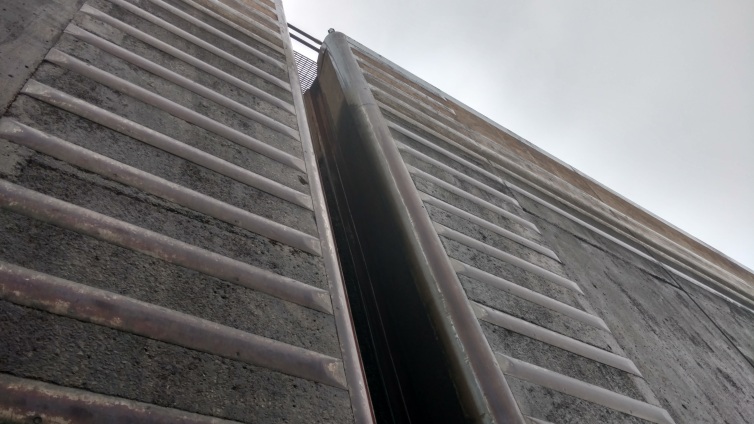 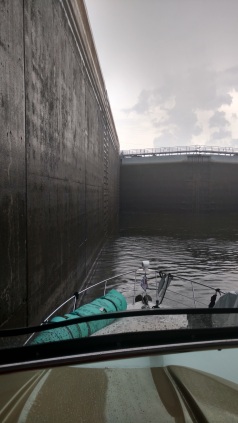 Once out of the locks we had about another 5 miles to go down-river until we reached Joliet.  We had to have three bridges raised in Joliet.  It was the easiest time I’ve ever had going under three bridges.  The first operator raised the bridge quickly and then called ahead to each of the other bridges and they were all up as we approached.  Just under the last of the three bridges we tied up to the town wall in Joliet.  There’s no charge for docking on the town wall and they supply free power!

My mom met us in Joliet and brought a picnic dinner for the eight of us.  My parents then took the girls to the park while Laura and I ran to a grocery store to grab some fresh produce that we ran out of time to do while still in Chicago.  Shortly after we got back my parents, Sophie and Zoe left to head home and we got Molly and Maddy to bed.  We’ve watched a handfull of petroleum barges go by while watching some TV.

Tomorrow we’ll make our way down river some but we’re listening to the announcements on the VHF and reading Notice to Mariners about flooding further down river so our progress might be delayed.