We are planning to leave two weeks from today.  14 days.  Suddenly everything is happening really quickly.  We’re down to the point of trying to coordinate with people to see them one last time.  The goodbyes each time we see someone have gotten harder and we are really running out of time to do all the hundreds of things we’ve been saying we need to do before we leave.

The season has continued to be a mechanically somewhat challenging one.  The latest fun was the generator deciding to produce 400 volts instead of 230 volts.  This resulted in the frying of two air conditioners, two battery chargers and a battery.  All those issues have been fixed, the radar is back from Raymarine, the missing trim tab has been replaced, and things are starting to come together on the boat.

Saturday night was the annual E-dock party at Burnham.  Our neighbors threw us a bit of a Bon Voyage bash along with the party.  It was really nice of them and it has been so nice to hear from everyone with well wishes for our trip as well as being told how much we will be missed.  I think that might have something to do with my sometimes helping fix boats as well. 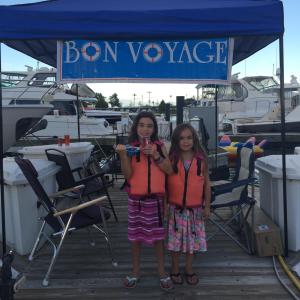 We are going to miss Chicago an awful lot.  We’ve never done anything like this before so it’s a big step for us.  We’re (I think we all are, I know I am) very excited about this but also a little nervous.

We will certainly miss this view.

This weekend we also had a new design for the name put on the boat.  I’ve never been too happy with the old one and finally got the new one installed.  It was done by Phil from Chicago Sign Systems, I think he did a great job.  Plus, he donates tons of signs for the girls’ school so I was very happy to be able to support him. 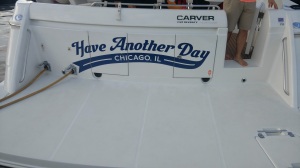 The next two weeks will be very busy.  I recently found out that I have to take everything off the hardtop to make it under a railroad bridge just outside of Chicago.  That’s going to take quite a bit of work and add another wrinkle of complexity to an already pretty complicated first day.

For now, back to preparations…